Every semester, HIF offers the opportunity for undergraduate and graduate students to intern with the foundation gaining substantive work experience while enjoying the bustling life of the US capital. This summer HIF is hosting Andrew Juhasz of Lexington, MA.

Andrew Juhasz is currently an undergraduate at McGill University in Montreal, Canada. His goal with this internship was to learn about the ways a non-profit foundation works and functions, with the added benefit that the work would be based on strengthening the people-to-people relationship between the United States and Hungary. 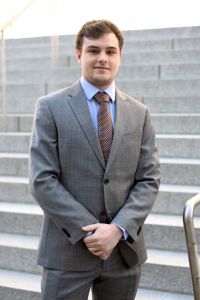 Andrew was born and raised in Boston, Massachusetts with his Hungarian parents, who left the oppressive communist regime of (then) Czechoslovakia. His parents grew up in the southern region, known as Felvidék, which has a large Hungarian minority, they arrived to the United States in 1987, and over time became involved with the Hungarian community in the Boston area. Every summer he makes it a priority to visit his relatives in the Felvidék region of Slovakia. This year, he also worked as an English teacher in a secondary school called Selye János Gimnázium in Komárno, Slovakia.  Andrew hopes to build relations there that would strengthen opportunities between the U.S. and Hungarians.

What really kept him close to his Hungarian heritage here in the United States has been his involvement in the life of the Hungarian community in Boston through Boskola (Bostoni Magyar Iskola és Óvoda) and the Bodnár Gábor Cserkészcsapat (part of the Hungarian Scouts Association in Exteris). Every other weekend about two hundred children of all ages from all over New England gather for a few hours on Saturday mornings to learn Hungarian language and culture. This community represents a microcosm of Hungarians with roots from the Carpathian Basin and beyond, and is very close knit. Andrew attended the school and the scouts from a very early age, and got to know a great number of teachers and students, all making an effort to preserve our Hungarian culture and traditions, in the United States.

Working at the HIF has given me the opportunity to gain work experience in the office, and to see first hand the efforts that are being made to help support Hungarians in the United States. I know from my own experience that if it wasn’t for Boskola and the Hungarian Scouts, it would have been more difficult trying to stay connected with my Hungarian heritage. Being able to work with a team that supports similar efforts around the United States is very rewarding to me.

Andrew’s internship at HIF also provided the added benefit of being based in Washington D.C. where he has multiple opportunities to attend panel discussions, hearings, briefings and conferences that interests him.

Whether you are Hungarian or not, interning at HIF will give you a perspective on the amazing work Hungarians are eager to do in the U.S. to preserve and promote Hungarian culture. During the internship I have also developed my skills in writing, analysis, and evaluation, all of which are important in my path towards majoring in political science, and perhaps even developing a career in this line of field.