Dr. Árpád Hornyák on the far right, and standing next to him, Dr. Tamás Kovács

The American Hungarian Educators Association (AHEA), and the Hungarian Studies Association of Canada are two organizations that are devoted to the teaching, studying, and dissemination of Hungarian society, culture, and history. This year, these two organizations joined to create a conference that would be a part of the larger Congress of Humanities and Social Sciences of Canada established by the Canadian Federation for the Humanities and Social Sciences, along with 70-80 other academic associations, each with their own conference. The AHEA-HSAC event was held from May 27-29 at Ryerson University in Toronto, Canada.

This year’s focus was Sovereignty, Compromise, and the Making of Modern Hungary: 1867 and Beyond. With it being the 150th anniversary of the Austro-Hungarian Compromise of 1867, it was fitting to reflect on a wide range of topics dealing with the past, present, and future of Hungarian sovereignty and the building of the Hungarian nation and state.

The conference had around 40 lectures and presentations with an audience made up of Hungarians, Americans, and Canadians.

Dr. Éva Petrás Mártonffyné, historian at the Historical Archives of the Hungarian State Security in Budapest, and one of our HIF Conference Support scholars, presented her paper titled: Romantic Elements of Hungarian Nationalism and Their Transformations in the Compromise Era. The paper spoke about the history of some of the substantive romantic ideas of Hungarian nationalism as they were used and instrumentalized in the Compromise era, with an outlook to their later use. Dr. Petrás was also chair of the session on Teaching History and Economics in Hungary.

“Since the audience consisted of American, Canadian and Hungarian experts, it provided me a wide range of feedback how a specifically Central European and Hungarian topic could be approached. The discussions afterwards suggested new directions of continuing research, as well as confirming the results that have been reached so far.” – Dr. Éva Petrás Mártonffyné

Dr. Petrás was able to get acquainted with scholars from the United States and Canada during the conference, and she also plans to publish her presentation in an advanced form, making it possible for the wider public to improve their knowledge on the topic of Hungarian national consciousness. 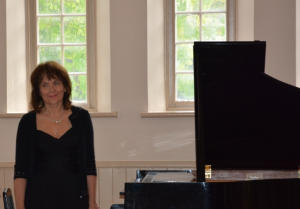 Another one of our scholarship recipients, Dr. Judit Mária Gábos, Head of the Music Department at the Eszterházy Károly University of Applied Sciences in Eger, presented her paper titled: Transylvania’s Hungarian voice as reflected in Bártok and Kodály’s Piano Works. The paper touches on Bártok and Kodály’s works with folk music, and suggests that they not only influenced folk music’s growth in scope and international exposure, but that folk music became the most powerful tool in the formation of 20th century Hungarian national identity. Dr. Gábos also played a recital open to participants of the AHEA-HSAC conference as well as other attendees of the Congress of Humanities and Social Sciences of Canada.

“I gained a broader socio-historical-cultural overview of the last 150 years since the compromise between Austria and Hungary (1867). My new, wider spectrum comprises not only the feelings of Hungarians from the present state of Hungary and the territories belonging once to the Austro-Hungarian Empire, but also of Hungarians who emigrated to the North-American continent.” – Dr. Judit Mária Gábos

Dr. Gábos will continue to research the correlations between geographical and socio-political changes in Hungarian history between 1867 and the first half of the 20th century, and the evolvements in Hungarian music. Additionally, she plans on including piano works by Canadians into her musical repertoire.

Dr. Tamás Kovács, Deputy Head of Department and senior archivist at the National Archives of Hungary, and another recipient of the HIF Conference Support Scholarship, presented his paper titled: Who Was Hungarian or a Hungarian Citizen Before 1948, According to the Documents of the Ministry of the Interior. This presentation analyzes the 1879 Citizenship Law, which was valid until 1948, and the way its interpretation and application had to adapt to the historical events that transpired up until the modern day.

Dr. Kovács was very happy with the way each lecture was well complemented with one another, especially ones by his colleagues from outside of Hungary, who talked about Slovaks and Jews living in Hungary, and Transylvania.

“The lectures widened my professional horizons and gave me many new aspects as well. The colleagues presented new sources and interesting questions as well. I will be able to, and want to use these aspect in my different publications in the future.” – Dr. Tamás Kovács

Dr. Árpád Hornyák, associate professor at the University of Pécs, was also a scholar recipient. The paper that he presented was titled: National self-defence and imperialism. The Balkan policy of István Tisza’s Hungary during World War, which dealt mostly with the political views of Count István Tisza on the Balkans.

“The purpose of my attendance to the conference was to introduce the results of my research concerning the Balkan policy of Hungary in World War I to a scientific audience, and to meet historians and other scholars with research interests about the history of Central Europe and the Balkans. I think I managed to fulfill these aims. The benefits of the conference surpassed all my expectations, since it gave me the opportunity to deepen my knowledge. I met new people of my research area and made the first steps to get involved into the overseas scientific circles.” – Dr. Árpád Hornyák

Due to his successful presentation, the Hungarian Studies Review offered to review Dr. Hornyák’s last book, and the editor of the Hungarian Cultural Studies also offered to publish the edited version of his paper. Dr. Hornyák met a colleague from Lakehead University who is involved in the project Trianon 100, with whom he will collaborate for further research studies dealing with the history of the Balkans at the turn of the 19th and 20th century.

More information on AHEA and HSAC can be found on the following websites: