Kossuth in the Unites States

Kossuth was the first foreign statesman since the Marquis de Lafayette to address a joint session of Congress.

Lajos Kossuth was a Hungarian lawyer, journalist, politician and Regent-President of the Kingdom of Hungary during the revolution of 1848–49. He was honored in his lifetime not just in Hungary, but in the United States, as a freedom fighter and bellwether of democracy. After his visit to U.S., streets, squares, and even some towns and counties were named after the Hungarian hero. Kossuth was the first foreign statesman since the Marquis de Lafayette to address a joint session of Congress.

After the Hungarian Revolution had been defeated, at the request of the Congress, the Fillmore administration negotiated for the release of Kossuth and his men. Minister George P. Marsh succeeded, and Hungarians started to immigrate to the United States. Kossuth arrived to an exceptional reception to New York on December 6, 1852.

During his stay in America, he delivered several speeches, recruited supporters for the Hungarian cause and printed the famous Kossuth-dollars. Kossuth was welcomed everywhere and he also found sympathy, but did not receive official support for the Hungarian independence. President Fillmore gave the following instructions in connection with his visit: ”sympathy, personal respect and kindness, but no departure from our established policy.”
Kossuth also met Abraham Lincoln at a celebration in Springfield, where Lincoln said that the “most worthy and distinguished representative of the cause of civil and religious liberty on the continent of Europe”. 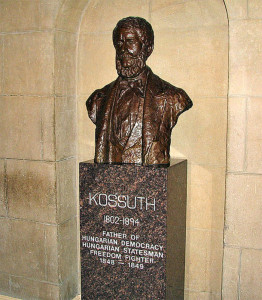 The Kossuth Bust in the United States Capitol

To celebrate and commemorate the friendship and shared values between the people of the United States and those of Hungarian descent, The American Hungarian Federation commissioned a bronze bust of Lajos Kossuth and offered it to the U.S. Congress.

The dedication ceremony took place on March 15, 1990, Hungarian National Day, under the magnificent dome of the Capitol Rotunda. The bust is one of only two honoring non-Americans in the Capitol. The base reads, “Louis Kossuth, Father of Hungarian Democracy.”

← Prev: Admiral of New England Next: The Life of Sándor Márai →