A Hungarian Touch in the Life of the Legendary John Smith

John Smith (1580 – 1631) was an English soldier, explorer and author. He was knighted for his services to Sigismund Bathory, Prince of Transylvania and Mózes Székely. He was a leader of the Virginia Colony , and led an exploration along the rivers of Virginia and the Chesapeake Bay. He was the first English explorer to map the Chesapeake Bay area and New England.

Our main source about John Smith’s life comes from his notes titled “The True Travels, Adventures, and Observations of Captaine John Smith”. Based on his writings, we can say that he had an exceptionally adventurous life.

Fights against the Turks

Smith fought against the Turks in Slovenia, Hungary and Transylvania [today Romania]. He earned several awards for his bravery. Bathory, Prince of Transylvania gave Smith the title of “gentleman”, and with it a coat of arms that consisted of three Turks’ heads representing the three Turks killed and beheaded by Smith in individual jousting duels.

Smith helped to liberate Alba Regalis, the ancient Hungarian capital to fight against the Ottoman Turks. He assembled the “fiery dragons”-round earthen pots filled with gunpowder, covered with pitch, brimstone, and turpentine, and coated with musket bullets. Encased in an oil cloth, the pots were set on fire and flung into Turkish lines. As Smith wrote years later, “[I]t was a fearfull sight to be see the short flaming course of their flight in the aire, but presently after their fall, the lamentable noise of the miserable slaughtered Turkes was most wonderful to heare.” The bombardment helped break the siege and allowed the Austrians to take the city after a few bloody days of house-to-house fighting.

Smith had survived the siege at Alba Iulia (Gyulafehérvár), but he was wounded by the Tartars and captured in 1602. After he was healed, Smith was taken to a slave market and he was soled as a slave. Through many adventures, he managed to escape. On his way, he tracked Báthory down, collecting the money and honors promised him. 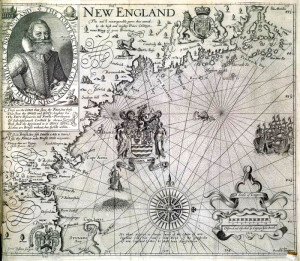 After his escape, Smith joined to the Virginia Company of London, a company that intended to colonize Virginia. He sailed to America with them from England in 1606. In 1607, Smith was captured in Virginia and taken to meet the chief of the Powhatans at Werowocomoco, the main village of the Powhatan Confederacy. Smith was released without harm and later attributed this in part to the chief’s daughter, Pocahontas, who according to Smith, threw herself across his body: “at the minute of my execution, she hazarded [i.e. risked] the beating out of her own brains to save mine; and not only that, but so prevailed with her father, that I was safely conducted to Jamestown”. This story became very famous and was also romanticized later in American culture.

← Prev: A Hungarian Hero in the American Revolutionary War Next: Kossuth in the Unites States →