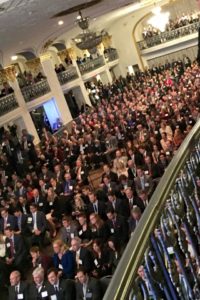 Every Fall, lawyers, law students, and other individuals interested in law and public policy from around the country, converge on Washington to attend the three day Annual National Lawyers Convention organized by the Federalist Society. Each convention is full of panels featuring noted scholars and experts from across the political spectrum as well as addresses by public officials and other public personalities.

The three HIF-supported Hungarian participants benefited from intense discussions on a great variety topics ranging from freedom of speech, regulatory issues, constitutional and statutory interpretation, and the lessons learned from the jurisprudence and legacy of Justice Scalia.

Dr. Beatrix Borbás is an attorney and an associate professor at National University of Public Service whose research focuses on finding new legal, political and sociological solutions in the US that could be used and adopted in Hungary in the area of legislation and law enforcement. Dr. Mátyás Módos, who is a PhD student researching the quality-enhancing methods of legislation and a senior legal advisor at the Office of the Hungarian National Assembly, also participated at the Fourth Annual International Conference on Legislation and Law Reform during his stay in Washington. Dr Sandor Udvary is an associate professor at Károli Reformed University, School of Law and an advisor at the Constitutional Court of Hungary whose recently published a book on the US legal practice of class action suits. 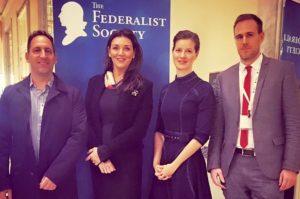 For us, Europeans, all the more so for Hungarians, the elevated, still highly precise style of the American Supreme Court decisions are enlightening. With all the other presentations, I have brought home a commitment for never giving up the quest for reconciling high style with precise academic content.
Dr. Sandor Udvary

Since 2001, the Barbara K. Olson Memorial Lecture and a following reception have also been held during the convention.  The highlight of the entire convention is always the Annual Banquet, usually held on the first night of the convention, which this year featured Supreme Court Justice Clarence Thomas and over 1700 guests from across the United States.