HIF was a proud supporter of a series of events in Boston, MA commemorating the 1956 Revolution hosted by the Hungarian Society of Massachusetts. Executive Director Anna Smith Lacey represented HIF at a number of the programs, which among others, included a wreath laying ceremony at Liberty Square and an impressive commemoration at historic Faneuil Hall featuring keynote speaker Balázs Somogyi and concluding with an outstanding piano performance by Ádám György.

At the end of Adam’s performance, my friend Sara (she’s 88 years old) rushed to the stage. She leaped out of her chair, ran up to him as Adam bowed to the audience and then hugged and kissed his hands. She said to me, “I am so glad to have lived this long to hear Liszt Ferenc performed like that.” Thank you for your incredible contribution to Sara’s soul. – Sylvia Hahn-Griffiths 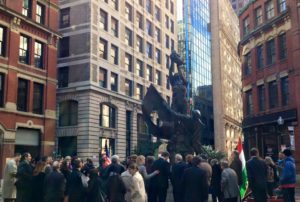 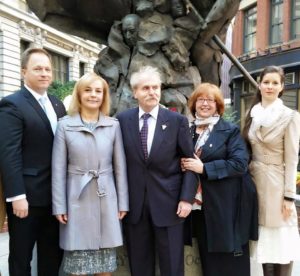 The program included the presentation of the Colors by the Members of Gábor Bodnár Scout Troop #2, Boston, accompanied by Hanna Rácz -Kozuma on flute, opening Remarks by HSM President Ildikó Juhász, poetry and poem recitals and remarks by Dr. Balázs Somogyi, President of the Hungarian Cultural Society of Connecticut.

Later in the day, HSM hosted an uplifting commemorative program at Boston’s historic Faneuil Hall. The event was attended by approximately 150 people, several of them from the generation of ‘56, who have participated in the revolution, and after starting a new life in the Boston area, founded the Hungarian Society of Massachusetts. 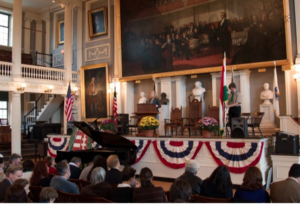 The program started with the presentation of the colors by members of Gábor Bodnar Scout Troup number 2 Boston – followed by the National Anthem of the United States performed by Dr. Lívia Racz, HSM director, and member of the Tanglewood Festival Chorus. 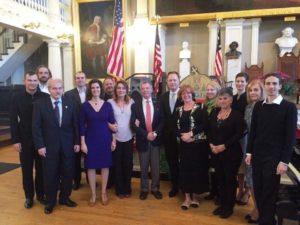 Ádám György is an internationally recognized Hungarian pianist known best for his interpretations of the great Hungarian composer Franz Liszt. Adam’s extraordinary musical talents were realized at an early age. At age 18, Adam won Hungaryʼs Pianist 2000 Award and was accepted at the Franz Liszt Academy of Music in Budapest. He went on to win the Vienna Classics Prize in 2002 with his outstanding interpretation of Haydnʼs Sonata in G major (No. 54). In 2003 he won the Special Prize at the San Remo International Piano Competition and in 2004, all Prizes (First Prize, Grand Prize and Special Prize) at the First International Chopin Piano Competition in Budapest.

Following his win of all Prizes at the First International Chopin Piano Competition in Budapest, the year 2004, CNN World Report identified Adam Gyorgy as “a rising star”. In 2005, Adam was invited to join the Steinway community, a single honor that places him in the company of the greatest pianists of all time. This critical acclaim earned Adam his debut at New York’s famed Carnegie Hall in 2008, where he played to a full house, and most recently, Singaporeʼs Esplanade Concert Hall. He continues to delight the world with an awe-inspiring program of classical works by Chopin and Liszt as well as his own improvisations of well-known melodies, unique in the classical music community. 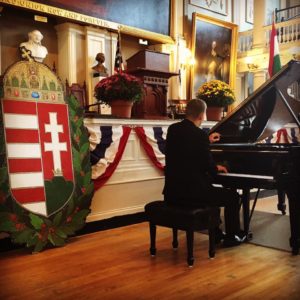 After the introduction by Dr. Lívia Racz, Mr. György performed the following compositions:

The Hungarian Society of Massachusetts together with Dr. Gabor Garai organized a photography exhibit displayed in the mall of the Prudential Center, one of Boston’s signature building complexes located in the Back Bay, on standing panels placed along the main walkway of the mall, and was be viewed by hundreds of people each day. 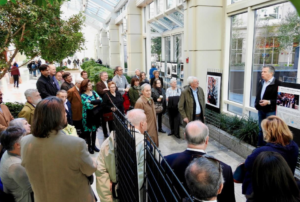 Photo Exhibit at the Prudential Center

The show featured portraits of ten significant Massachusetts residents who were 1956 immigrants, and who participated in the freedom fight; after its defeat they had to flee their homeland to avoid persecution, and started a new life here in the Boston Area. The photographs were taken in the intimate setting of their own homes with their descendants, who are second and third-generation Hungarian- Americans. The photographs were complemented by the biographies of the people who witnessed and were forever changed by this seminal event in European history. To put the subject matter in context, the show also included images of 1956 from the HSM’s collection and a timeline of the revolution.

The portraits were created by a local artist photographer during the summer of 2016.

On October 23, the day of the 60th anniversary, as part of the closing ceremony, the Hungarian Society of Massachusetts in cooperation with Dr. Gábor Garai, Honorary Consul General of Hungary in Boston, organized an afternoon of remembrance. Several local Hungarian Americans who participated in the freedom fight or witnessed the revolution recalled their memories from the fall of 1956, and talked about how they fled their homeland to avoid persecution, and how they started a new life in the Boston Area.

After the discussion there was a video presentation featuring interviews form the “Memory Project: a Hungarian American Visual History Archive” documentary film.

The program concluded with a short presentation by Csaba Katona about the soon to be published book “History of the Hungarian Society of Massachusetts”.

← Prev: 1956 Commemorations Across America Next: Hungarian Scholars at the Federalist Society's Annual Meeting →