Hungarian Scholars at the 2017 CEPA Forum

The Center for European Policy Analysis (CEPA) held its 9th annual forum on September 21st and 22nd. The CEPA Forum has become the leading annual transatlantic conference in Washington D.C., and it is the venue for the largest gathering of Central European officials, experts, and leaders in the United States. With HIF’s support, three outstanding Hungarian scholars attended the forum. 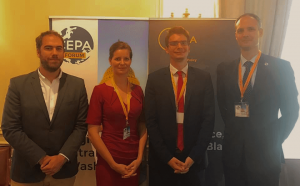 CEPA is the only American think tank dedicated purely to the study of Central and Eastern Europe. It was founded in 2005, and has rapidly grown to become a leading voice on security and rule of law issues in the region. Its mission is “to promote an economically vibrant, geopolitically stable and politically free Central and Eastern European region with close and enduring ties to the United States.”

HIF sponsored three Hungarian scholars, Márton Ugrósdy, Márton Barta, and Zoltán Turai who participated in the Forum’s events. The Foundation also planned a series of breakout sessions where Hungarian scholars could engage with their U.S. counterparts on a variety of issues.

Mr. Ugrósdy is the Deputy Director for Strategy at Hungary’s the Institute for Foreign Affairs and Trade. Before joining the Institute, Mr. Ugrósdy completed a fellowship at the Center for Strategic and International Studies (CSIS) through the Hungarian American Enterprise Scholarship Fund (HAESF). His presentation at the conference was entitled “Migration and Security: U.S. and European Perspectives.” He also shared his expertise with a piece on transatlantic relations that was circulated as a handout at the conference.

Mr. Barta attended the conference as a representative of Corvinus University in Budapest. At Corvinus, Mr. Barta is the Director of Strategy. Previously, he was a Research Fellow at CEPA in 2014, where he gained greater experience in Central European policy. The forum provided an important venue to expand his professional network and it gave him greater insight into interpreting American foreign policy.

Being able to listen to the politicians, experts, and military officials debating the hot issues of Central European security and politics (specifically, the present and future of V4 Cooperation, the potential paths of NATO’s reform, U.S.-Russia relations etc.) deepened my thinking on policy matters. It was also very interesting to hear decision-makers, as what really matters is how they conceptualize a given problem. Beyond these practical matters, I can use the knowledge and contacts gained in the Central European network-building of our University. – Márton Barta

As the first Andrássy Fellow at CEPA, Zoltán Turai was also in attendance. The Andrássy National Security Fellowship was started in June 2017 by HIF. The program is fully-funded for six months and aimed at developing Hungarian expertise on the United States and building long-term ties with the U.S. policy community. Before coming to CEPA, Mr. Turai worked at the Hungarian Ministry of Defense on Russia, the post-Soviet space, and cybersecurity issues. He too found the Forum very productive and worthwhile. It helped to enhance his experience as a CEPA Fellow.

We had excellent speakers, but the likes of Lt. Gen. Ben Hodges, Ivan Korcok, and Elbridge Colby made my CEPA Forum experience very special. The most important takeaway for me is that despite all the challenges we are having currently, the transatlantic link is alive and well, and it still matters to the United States. And this special relationship between the United States and Europe must be preserved, because it is the basis of our shared security and prosperity.” – Zoltán Turai

HIF Board Member, Kurt Volker, Special Representative for Ukraine Negotiations for the United States, provided the closing keynote of the second day of the CEPA Forum 2017. In his speech he offered a report card on the status of “Europe Whole and Free” and his perspective on the future of Atlantic relations. Read more.