Anita Balázs is working towards a Masters of Musical Arts at Yale University. This year, HIF is supporting her through its Graduate Scholarship to further pursue her studies and so she can continue teaching at Montclair State University.

While at Yale, Anita has had the fantastic opportunity to study with world-famous professors in a very welcoming milieu. The inspiring environment has allowed her to improve musically and to build strong relationships with her fellow students. As a cello student, Anita has a chance to participate in the Yale Cello Ensemble. The groups is actively practice and preparing for its upcoming concert in the Spring.

I believe that the atmosphere is one of the nicest I have had the chance to experience this far, possibly because the School of Music is a smaller society and students here help and support each other like a big family. 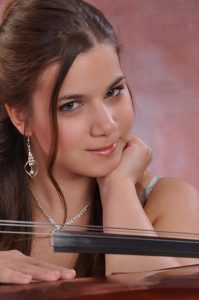 Along with studying at Yale, this is Anita’s third year teaching at the Extension Division at Montclair State University. While the commute can be difficult, Anita’s experience teaching is absolutely worth it and she would like to continue teaching there after graduating. The faculty at the Extension Division has been very  helpful in assisting Anita in building a studio there.

As a Hungarian musician, Anita has spent many years abroad to learn about other countries culture and music, As a cello tutor of the Extension Division of Cali School of Music at Montclair State University, Anita has the fantastic opportunity to teach young American cellists and bring them closer to Hungarian music and culture. She is starting a special project at Montclair where she will teach her students Hungarian composers’ pieces as well as folk songs, using Hungarian music books.

I find it very important to pass on the knowledge I gained throughout these years to young Hungarian musicians and help them discover new perspectives on the music field. I believe that by the end of this semester my students will have an extensive knowledge about each other’s music.

Building New Bridges Between Hungary and the US

In accordance with the program, Anita’s mother, who is a cello teacher in her hometown in Hungary, is going to teach her students music that is often played and taught in American music programs.