HIF is supporting Csilla Ábrán and László Dinca, two scholars in Quinnipiac University’s Hungarian American Business Leaders scholarship program. The scholarship program offers the best and brightest young Hungarian business leaders the opportunity to earn an American MBA and gain substantive experience with the American customer-first approach to business.  During the two-year MBA, students work part time at American companies.  They are then able to work up to 18 months full time before returning to Hungary. 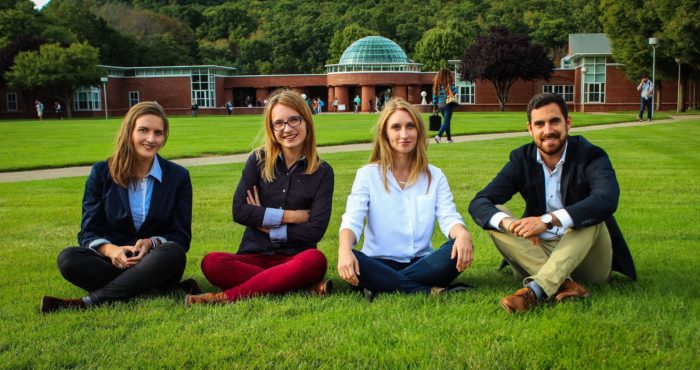 The mission of the program is to take their experience back home to build a future in Hungary and the region and strengthen the connection between Hungarians and Americans. Csilla and László arrived to the US in August this year and will return to Hungary in 2020.

Csilla Ábrán currently works in tax and accounting for Kyle Hamilton Consulting, Stratford, Connecticut. She holds a Corporate Financial Management degree from the Babeş-Bolyai University, Cluj-Napoca (Kolozsár), Romania. Prior moving to the US she worked as an analyst for British Petrol and as a credit controller of Marso Romania.  At Quinnipiac, she is pursuing her MBA in the Chartered Financial Analyst track.

“The scholarship has made a difference in my career and has inspired me to aim higher in the future.” – Csilla Ábrán

László Dinca is currently working with Quinnipiac’s Center for Innovation and Entrepreneurship helping launch American innovative startups.  He holds two bachelor degrees in electrical engineering from the Florida Institute of Technology and from the Budapest University of Technology and Economics after being awarded the STARS–Atlantis dual degree scholarship in 2010.  Prior to moving to the US, he worked in the semiconductor industry as a Technical Sales Engineer at Texas Instruments and as an Account Development Representative at Arrow Electronics. At Quinnipiac, he is pursuing his MBA with focus on Supply Chain Management.  László also received Fulbright scholarship support for the 2016/17 academic year, allowing him to focus on learning the American approach to startups and business. He aspires to launch his own innovative startup during his time in the US.

“After I was honored with the scholarship, I decided that I want to take the most out of these three years and not only learn about the different business aspects, but also to develop my entrepreneurial skillset. I believe that Quinnipiac University represents a successful blend between theory and practice with an emphasis on practice. There are plenty of extracurricular activities encouraging students to focus on and learn about their field of interest. I am delighted to say that besides pursuing an MBA I am spending my time in a creative environment, which I am sure I will benefit a lot in the future.” – László Dinca

The scholarship program was established in 2008 in conjunction with the launch of the István Széchenyi Chair in International Economics in that same year.  The Széchenyi Chair oversees the university’s programs with Hungary and has a mission to build bridges between the people of Hungary and the people of the United States of America.  In 2014 the programs with Hungary grew large enough that Quinnipiac launched the Central European Institute.  This was soon followed by the Novak Family Chair for Poland which was launched in 2015 and modeled after the Széchenyi Chair for Hungary.

“The Central European Institute is very grateful to have received support from the Hungary Foundation for our scholars this year. This award helped the CEI to fulfill its deeper goal of prepare future Hungarian business leaders and our mission to build relationships between the U.S. and Hungary.  These objectives and efforts strongly align with the Hungary Foundation goals and commitment to strengthen the exchange of knowledge and skills between the United States and Hungary” – Dr. Chris Ball, Director of the Central European Institute, István Széchenyi Chair in International Economics, and Honorary Hungarian Consul for Connecticut.

The financial support received from HIF will have a long lasting impact on both scholars as they excel both professionally and academically in the coming year. All that they learn and experience at Quinnipiac and during their entire time in the US will greatly enhance what they can and will do back home in Hungary over the years.