On the occasion of the sixtieth anniversary of the 1956 uprising and freedom fight the Hungarian House of New York presented an exhibit titled “Milestones – American-Hungarian Immigrants in the aftermath of 1956: Portraits and Life Stories” depicting the stories of the freedom fighters and immigrants, displaying their personal artifacts and portraits from 1956.

We believe in the importance of remembering the 1956 immigrants as well as learning about the social history of the Hungarian diaspora, since there is no systematic knowledge transfer and material related to the history of the diaspora. – Ildiko Nagy

The 1956 uprising and freedom fight was a pivotal point not only in the history of Hungary but in the history of American-Hungarian immigration as well. Of the 200,000 people who left Hungary then about 60,000 found a new home in North America. 1956 therefore remains an important Milestone for Hungary and the international scene as well.

The Milestones exhibit was organized by the Hungarian House of New York in cooperation with Norbert Bánhalmi, photographer, and in partnership with the American Hungarian Memorial Committee and the Consulate General of Hungary in New York. 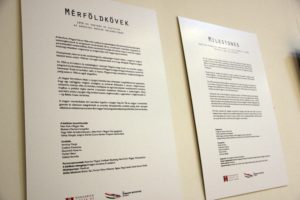 The interviews and portraits for the exhibition were recorded and produced by sociologist Ildikó Nagy, manager of the Hungarian House; Norbert Bánhalmi, photographer; and Gergely Szilvay journalist, the participant of the Kőrösi Csoma Sándor Scholarship Program.
The organizers of the exhibit conducted 17 biographical interviews and 15 photographic portraits of Hungarian 1956 immigrants and freedom fighters. The portraits were shot at each participant’s home, and included one important item that is meaningful for each participant and usually was taken from Hungary during immigration. At the exhibit all the portraits were accompanied by a short bilingual text telling the story of each immigrant. The exhibit also featured a section where personal objects of the participants related to 1956 or the immigration were presented.

Gergely Romsics at the Exhibit opening at the Hungarian House

The opening ceremony of the exhibit took place on October 22, 2016 as the first event commemorating the 1956 Hungarian revolution in New York City. About 140 people attended the event. At the opening of the exhibit, the audience was welcomed by Ildikó Nagy and Ferenc Kumin, Consul General of Hungary.
Historian Gergely Romsics, director of the Balassi Institute, Hungarian Cultural Center, New York gave a speech on the importance of studying oral history. Two well known 1956 immigrants, László Papp, architect and president of Hungarian American Memorial Committee, and Balázs Somogyi, physician and president of the Hungarian Cultural Society of Connecticut, an active organizer and member of the Hungarian Club of Wallingford also delivered welcome speeches.

As part of the project, after installing the exhibit,  historian Csaba Békés, Visiting Professor from Columbia University and a well-known expert on 1956 and the cold-war period, was invited to give a lecture to the students of Arany János Hungarian School about the importance of 1956.

„During the time of the Hungarian uprising the public in the West observed with helpless amazement as the people in a country behind the Iron Curtain rose up against the far stronger Soviet super power, putting their lives, their families and their livelihoods at risk in a heroic, tragic, according to the prevailing political logic irrational, struggle for freedom. Fighting for the same ideal which in the West is the most abstract, but at the same time, the most indispensable.” – historian Csaba Békés.

The media partner of the project was: Mandiner providing extensive coverage of the immigrant stories in Hungarian. Translators were Margit Arnóczy, Zsuzsanna Cselényi, Katarina Duzdevich, Viktor Fischer, Veronika Székely. The installation and room preparation was made by István Tordai, Zsolt Tordai.

Complete texts were published on the Facebook page of the Hungarian House.

The exhibit materials and portraits are available on the website of the project: http://www.hungarianhousenyc.com/merfoldkovek/