HIF Chairman of the Board April Foley, HIF Board Members George Pataki and Edith Lauer, and HIF Executive Director Anna Smith Lacey joined members of the Hungarian American Coalition at the Annual Mikulás Dinner to celebrate the Hungarian American community’s accomplishments this year and the leadership of  Max Teleki who lead HAC for the last 12 years and is stepping down as President of the Coalition. 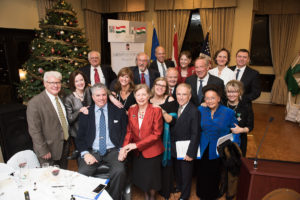 On December 2, 2016 over one hundred Coalition members and guests attended the traditional Mikulás Dinner hosted by the Embassy of Hungary. Leaders of Hungarian American organizations from all across the country as well as honorary consuls and honorary economic counselors came together to celebrate together joint achievements of the Hungarian American community this year, which marked the 60th anniversary of the Hungarian Revolution.

HAC’s most important projects and accomplishments in 2016 focused on leadership training, preservation and promotion of culture, information advocacy and community outreach. The HIF-supported Coalition Internship Program offers valuable professional experience in various fields for 10 young Hungarian students from Hungary and across the region throughout the year.

HIF Chairman of the Board April Foley and HIF Board Members George Pataki and Edith Lauer both delivered remarks honoring the over one decade long leadership of outgoing HAC President, Max Teleki who provided strategic leadership to the largest umbrella organization of the Hungarian community in the United States.

Max Teleki stepped down after 12 years of leading the Coalition

HIF Chairman of the Board April Foley