The Hungarian Community in Georgia commemorated the 60th Anniversary of the 1956 Hungarian Revolution and Freedom Fight with an eye-catching photo exhibit, remarkable commemorative program and award ceremony for the local 56ers at the Roswell Presbyterian Church Fellowship Hall. The event was organized by the Hungarian Community Church of Georgia with support by The Hungary Foundation.

October 23, 2016 was very special day for more than a hundred Hungarians living in the state of Georgia. Prior to the commemorative ceremony, people representing every generation stopped by a nicely arranged exhibition and looked at the photos of dramatic scenes, old newspapers and other symbolic items about the 1956 Revolution and Freedom Fight. Parents excitedly showed the very familiar streets and buildings of Budapest to their children and grandchildren, and talked about what happened during those days and where the events occurred in the city. Some of the 56ers shared their personal stories and involvement in the freedom fight, which were also captured in a book published a few years earlier.

The exhibition was followed by a deeply touching ceremony, where local 56ers were invited as distinguished guests. At the beginning a short video with scenes from the Revolution and an interview with one of our 56ers was presented. After singing together the Hungarian National Anthem, Sarolta Tulipán welcomed all the guests and highlighted the significance of this day.

We were honored and privileged to learn about the exceptional Resolution that was passed by the House of Representatives of the State of Georgia in recognition of the 60th Anniversary of the 1956 Hungarian Revolution and Freedom Fight, and in celebration of the Hungarian-American friendship and common values that tie our great state of Georgia and the beautiful country of Hungary together. 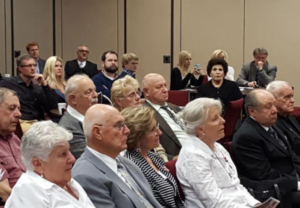 During the commemorative program, we listened to Dr. Imre Bodó’s extraordinary recital of a poem by Gyula Illyés entitled “Egy mondat a zsarnokságról” (A sentence about tyranny). The empathy was palpable among the audience during the recital. Many people, from both the older and younger generations were wiping tears from their eyes at the refrain “Mi egy vérből valók vagyunk” (We share the same blood) of the song “Nélküled” (Without You), sung by our talented singers Gabriella Tóth and Emese Vas.

Professor András Balás, Dean of Augusta University delivered the keynote speech, in which he painted the stunning and serious historical memories of the Revolution and Freedom Fight, and shared his personal stories and memories about the atrocities his parents and he – as a young child – experienced after the Revolution: how the Hungarian secret agency spied on their phone conversations and what kind of secret reports the agency wrote about them. Dr. Balás expressed his gratitude that several local 56ers could attend the commemoration event and thanked them for toppling the Stalin Statue. “You’re welcome,” came the response from someone sitting among the group of 56ers.

“Where heroes are valued, there will always be heroes. Not only in the 60th anniversary year, but the years to come.” – András Balás

Reciting his own poem “Ki az a tiszt?” (Who is that military officer?) and piping the song Hallelujah by Cohen, László Juhász remembered his father who was tortured, and all the martyrs of the Revolution. It was an intimate and emotional personal remembrance. The flag on display was the flag that had covered his father’s coffin.

In the next part of our ceremony we honored our 56ers who escaped from Hungary after the Revolution. Several of them actively participated in the demonstrations and the freedom fight. On behalf of the Hungarian Community Church of Georgia, Sarolta Tulipán and Zoltán Dóczi called the 56ers by name to the decorated platform and handed over a uniquely designed and individualized bilingual 60th Anniversary Award. All the 56ers were truly touched by this gesture.