On Sunday, October 23, approximately 150 Hungarians from the Central Florida Area including Orlando and north to Jacksonville gathered at the First Presbyterian Church of Daytona Beach, FL for an afternoon and evening of remembering the 1956 Revolution which featured the unveiling of a new Freedom Monument “Szabadsag Kopjafa” in the courtyard of the church. 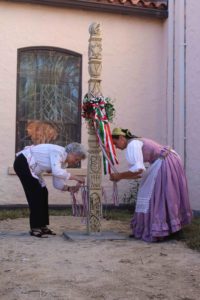 “Szabadsag Kopjafa” was created by Peter Wolf Toth, a Hungarian sculptor, who, with his parents, immigrated to the United States when he was 8 and settled in Akron, Ohio.

This project allowed us to be virtual witnesses to one of Hungary’s most memorable moments in history. We were left with a deeper appreciation of our heritage whether we were 8 or 80. – Rev. Emese Asztalos

The commemoration, held on October 23 began with Hungarian Community Church Pastor Emese Asztalos leading a worship service in the sanctuary assisted by Pastor Bill Anderson of First Presbyterian and Csilla Csagoly providing music and Jolan Toth‘s  poetry recital. The congregants were then led into the church courtyard where the “Szabadsag Kopjafa” (Freedom Monument) was unveiled. The surface of the handsome eight-foot upright piece of wood had a number of Hungarian symbols carved into it, including the years 1956 – 2016, Hungary’s Coat of Arms and mythical falcon, six bars for the 60th, tulip, the sun, eternal flame, water, earth, star.

The “Szabadsag Kopjafa” was created by Peter Wolf Toth, a Hungarian sculptor, who, with his parents, immigrated to the United States when he was 8 and settled in Akron, Ohio. He later studied art at the University of Akron. Toth is perhaps best known for the Trail of the Whispering Giants, a collection of sculptures resembling Native Americans of the region. The ongoing project has been recognized by the Smithsonian. He also created Medieval King Steven #73, which stands on the shores of the Danube River in Delegyhaza, Hungary. Overall, he has created more than 74 sculptures – ranging from 15 to 40 feet in height — including at least one of the Whispering Giants in each of the 50 states, as well as several Provinces and territories of Canada and Europe. Each of these heroic Whispering Giants chronicles the epic struggles of all people facing injustice, inhumanity and tyranny. He is a resident of Edgetwater, which is where his studio is located, although he also spends a great deal of time traveling internationally. Mr. Toth was among those in attendance, and he addressed the guests. 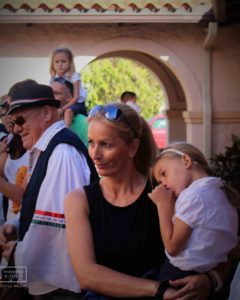 “We were left with a deeper appreciation of our heritage whether we were 8 or 80.”

As part of the ceremony, memorial wreaths – one from the Hungarian/American Social Club and one from the Hungarian church – were hung on the kopjafa as were many red, white and green ribbons with names of those being memorialized/honored by a loved one. A plaque is also being made and will be placed in the concrete base that holds the piece of art. Pre-school students from Makviragok, Orlando, led the group in singing the Hungarian National Anthem and Ana Balogh recited a poem.

One of the more striking elements of the event could be seen in the eyes of the children as they heard the stories of three members of our community – Margaret Horvath, Helen Santha and Hugo Tischler – who reminisced about their experiences in Hungary during the revolution.

Guests, many dressed in traditional Hungarian attire, then enjoyed a reception in the church fellowship hall, festively decorated for the occasion. Janos Noszek sang  Hungarian songs while accompanying himself on the keyboard. Tulipanok, the costumed children’s folk dance troupe, entertained; and their teacher, Istvan Csapai, performed a special dance for the guests. Pieces of art created by the youngsters for the contest attracted a great deal of interest. The video and pictures taken during the project were previewed during the evening.

As a community of faith, part of our mission statement is to “explore and preserve our heritage and language… and to strengthen connections with second, third and fourth generation Hungarians.”  This is something that members of the Hungarian Community Church joined by Hungarians throughout the area live out with regularity, and this grant gave us an opportunity to undertake some exciting projects that would not have been financially feasible before. – Emese Asztalos, Hungarian Community Church (Daytona Beach, FL)

“Szabadsag Kopjafa” was created by Peter Wolf Toth, a Hungarian sculptor, who, with his parents, immigrated to the United States when he was 8 and settled in Akron, Ohio.