More than 2,500 people attended the exhibit and participated in special events during the 45-day display of the 1956 Revolution at the Arts Clayton Gallery in Jonesboro, Georgia. The exhibit told the story of the Hungarian Revolution and Freedom Fight in 1956 through photographs of both 1956 and 1989, newspapers and magazines, personal testimonials from the Memory Project, and personal artifacts, including a sketchbook filled with original artwork from that time. Memory Project is an award-winning project that consists of video interviews with ’56-ers who immigrated to the United States was also featured.

First 1956 Exhibit in the US this Year

More than 125 people joined in the commemoration and celebration, including a number of civic leaders from greater Atlanta.

The exhibit opened in metropolitan Atlanta on Friday, August 19th. It was among the first exhibits in the United States to commemorate and celebrate the 1956 Revolution during this special anniversary year. More than 125 people joined in the commemoration and celebration, including a number of civic leaders from greater Atlanta.

“In addition to reaching out to the local Hungarian community, we had a great opportunity to showcase this special exhibit to the large international community in Atlanta as well as our steady stream of international visitors who come to the Arts Clayton Gallery, in a partnership with Clayton Countyʼs tourism programming,” added Linda Crissey, Executive Director of Arts Clayton. 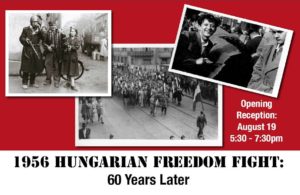 Hungarian Honorary Consul General, John Parkerson, helped introduce the exhibit by stressing the importance of the relationship between Hungary and the United States and the many similarities the two countries share. Among the similarities, Parkerson noted, is the citizensʼ enduring “passion for freedom.”

Many pictures included in this exhibit had never before been seen by the public. The exhibit concluded with photographs of Hungarian refugees escaping as well as the 1989 transition to democracy in Hungary. These photos highlighted the first-ever public commemoration of the 1956 Revolution in Hungary and the demonstrations in 1989 which some say were directly linked to 1956. All photographs from 1989, were taken by Pirsoka Nagy (Witness to History: Traveling Photo Exhibit – sponsored by HIF in 2014).

Andrea Lauer Rice, curator of the exhibit and President of the Hungarian Club of Georgia, told the crowd that she grew up hearing stories of the Revolution from her grandparents, aunt and uncle and Mother. For the past 20 years, she has created multimedia projects to help tell the story about this important time in history that had far-reaching global impacts.

Educating the Next Generation About 1956

Throughout the 45-day long exhibit, a special Education Station day was scheduled for younger children on Saturday, September 10 at 3:00 PM. More than 40 children attended and learned traditional Hungarian crafts.

The exhibit ran from August 19th through September 28th during regular gallery hours: 9 am to 5 pm Tuesday through Friday and 10 am to 4 pm Saturday. Admission was free.