Cleveland Hungarians Commemorate 1956 with a Tour de Force of Performances

The largest Hungarian American community in America, many members of which emigrated in 1956 hosted an impressive series of commemorative events for the 60th Anniversary of the 1956 Hungarian Revolution. The programs were sponsored by the United Hungarian Societies (UHS) with the support of the Hungary Foundation .

HIF’s support allowed us to commemorate the 60th Anniversary of the 1956 Hungarian Revolution in the greater Cleveland Hungarian community in the grand and meaningful and appropriate manner that this landmark anniversary warranted. – Andrea Lazar (UHS) 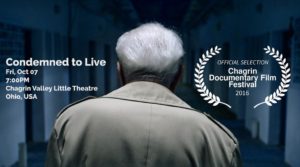 The Chagrin Documentary Film Festival, a five day celebration of the art of documentary film, at venues in and around the century village of Chagrin Falls, Ohio, held on October 7, 2016, featured a Hungarian documentary “Condemned to Live” by young Hungarian filmmakers Noemi Veronika Szakonyi, and Mate Artur Vincze. The film was recommended by George Pogan, third-generation Hungarian American and Secretary of the Hungarian American Coalition.

Condemned to Live documents what happened after the failed Hungarian Revolution of 1956, when scores of innocent people who didn’t see eye to eye with the Soviet-backed government were sentenced to death or thrown in jail where prisoners were abused, tortured or killed. In the documentary, four survivors of one of Hungary’s most infamous prisons, Kisfogház, share their accounts of imprisonment with the world. 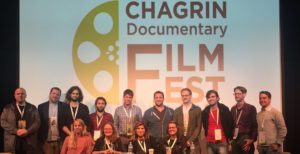 They watched as their friends were executed in the courtyard, learned secret codes to communicate with one another, and resisted their captors in any way they could. But they survived—as one of the dissidents puts it, they were “condemned to live… condemned to remember.” The film offered a shocking portrait of the impossibility of processing this trauma and the survivors’ incessant compulsion for remembrance.

The film was followed by a Q&A panel discussion titled “Exploring the 1956 Hungarian Revolution” with directors Máté Vincze and Noémi Szakonyi, who through their work are deeply committed to finding innovative ways to preserve the stories of the victims of communism. After the screening, UHS sponsored a reception.

At one time (maybe still) there were more Hungarians in Cleveland than anywhere in the world outside of Budapest. Many Hungarians came here in 1956 because of the Fight for Freedom against the Soviet Union in Hungary. On October 20, 2016 the Hungarian community, including many 56ers, gathered at Cleveland City Hall to remember the 1956 Revolution. The Hungarian Flag flew over City Hall and a large Hungarian flag with the Communist symbol blanked out, hung in the Rotunda. 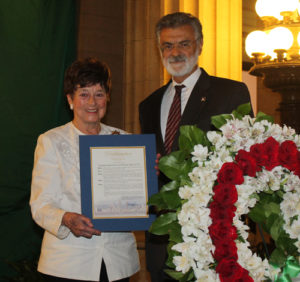 Dr. Jeanette G. Brown served as Mistress of Ceremonies at the program celebrating the 60th anniversary of the Hungarian Revolution and Freedom Fight of 1956. In her welcoming remarks Jenny told how ’60 years ago a small nation shook the foundation of the Communist world.’ The US and Hungarian flags were presented and Ted Horvath led the crowd in the US and Hungarian national anthems. Rt. Rev. Dr. Csaba Krasznai of the First Hungarian Reformed Church gave the Invocation. Rev. Krasznai first spoke in English and then Hungarian. Mistress of Ceremonies Dr. Jeanette G. Brown introduced Cleveland Mayor Frank Jackson who praised the diversity of Cleveland and the contributions of the Hungarian community. Mayor Jackson recalled that as a young boy his father showed him black and white television pictures of tanks in a far-away city. “That had to be Budapest during the Hungarian Revolution,” he said. He also presented a proclamation from the City to Dr. Brown.

Honorary Consul General of Hungary Laszlo Bojtos, a 56er himself gave the keynote address at the program celebrating the 60th anniversary of the Hungarian Revolution and Freedom Fight of 1956. Consul Bojtos talked about his experiences in 1956. Approximately 200 people attended the event.  Many of the attendees were 56ers.  The attendees were all invited to stay and meet Mayor Jackson and the 56ers and to enjoyed the reception afterwards. The event was also filmed by and interviews conducted by a small media group from Hungary available here.

Master of Ceremonies Michael Horvath welcomed the crowd to the commemoration and led the crowd as they sang the national anthems of the United States and Hungary. Horvath then introduced young Hungarian Scout Julian Balassy who recited a poem in Hungarian. Next, Andrea Meszaros from the board of the Cleveland Hungarian Heritage Society and Museum spoke in Hungarian about the Hungarian Revolution of 1956. Next, Michael Horvath led a prayer for the 1956ers. The crowd said the Our Father in Hungarian. 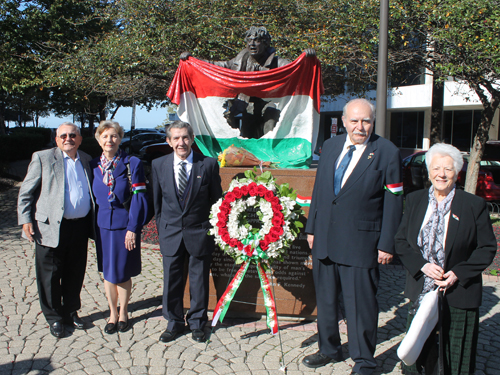 After the wreaths, some members of the crowd placed flowers at the statues. Rt. Rev. Dr. Csaba Krasznai of the First Hungarian Reformed Church in Cleveland spoke next at the commemoration.

Finally, Master of Ceremonies Michael Horvath retired the Hungarian Scout Honor Guard which ended the commemoration of the 60th anniversary of the Hungarian Revolution of 1956 in Cardinal Mindszenty Plaza in Cleveland, Ohio. In addition to many Scouts, the crowd of about 60 also included many 56ers.

The Legacy of Freedom concert held on Oct. 23rd, Sunday afternoon drew the largest audience among all 1956 commemorative events. It was attended by 400 Cleveland-area Hungarian Americans, and it featured the 50-member very talented Cleveland Women’s Orchestra. The concert was held at St. Emeric Roman Catholic Church, the institution the community fought successfully to have reopened in 2012 after the local Bishop had ordered it to be closed. 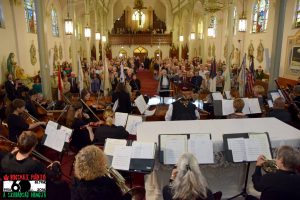 Over 400 people attended the memorial concert at St Emeric Church

The concert designed by Andrea Lazar lasted about an hour and a half. It featured beautiful Hungarian classics such as Liszt’s Hungarian Fantasy and Hungarian Rhapsody, Kodály’s Háry János and the folk-song, Felszállott a páva, and ended on the high notes of Berlioz’s Rákoczi March. Cimbalom artist Alex Udvary played that traditional instrument. Tenor Kyle Kelvington’s performance of “Szép vagy, gyönyörű vagy, Magyarország” and “Hazám, Hazám” from Erkel’s Bánk Bán was greeted with both tears and a thunderous ovation by the audience.

A 40-page commemorative booklet created by Andrea Lazar provided the historic background about the 1956 Revolution and its significance, as well as background information about the Hungarian music performed by the Orchestra, written by Peter Laki. Father András Mezei recalled events of the 1956 Revolution, and Edith Lauer, the event’s keynote speaker, spoke of its significance. 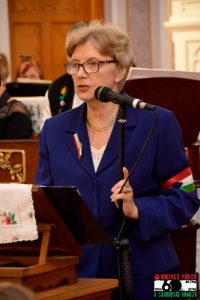 HIF Board Member Edith Lauer, keynote speaker of the event

“By introducing democratic reforms, this small nation threatened the Kremlin’s dominance of Central and Eastern Europe. Most importantly, the sight of Soviet tanks mowing down workers and students caused the decline and ultimate collapse of the world communist movement. The courage of Hungarian citizens exposed to the world, as no one had before, the hypocrisy and weakness of the Soviet system.” – Edith Lauer

The Concert was professionally recorded; a CD is being edited and will be available for archival purposes. After the reception members of the audience stayed to enjoy a generous reception.

← Prev: Ti Ti Tabor Offers Cultural Immersion Experience for Over 160 Children in 2016 Next: Hungarian American Coalition's Internship Program Brings Ten Hungarian Students to the US in 2016 →