More than 125 people joined in the commemoration and celebration, including a number of civic leaders from greater Atlanta.

It is the first exhibit in the United States to commemorate and celebrate the 1956 Revolution during this special anniversary year.

The exhibit tells the story of the Hungarian Revolution and Freedom Fight in 1956 through photographs, personal testimonials from the Memory Project, and personal artifacts, including a sketchbook filled with original artwork from that time. Memory Project is an award-winning project that consists of video interviews with ’56-ers who immigrated to the United States. 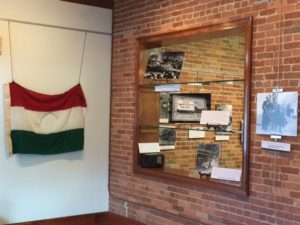 Many pictures included in this exhibit have never before been seen by the public.

Andrea Lauer Rice, curator of the exhibit and President of the Hungarian Club of Georgia, told the crowd how she grew up hearing stories of the Revolution from her grandparents, aunt and uncle and Mother. For the past 20 years, she has created multimedia projects to help tell the story about this important time in history, that had far-reaching global impacts.

Throughout the 45-day long exhibit, there will be a number of educational programs for local college students, as well as an Education Station day scheduled for younger children on Saturday, September 10 at 3:00 PM.

“In addition to reaching out to the local Hungarian community, we have a great opportunity to showcase this special exhibit to the large international community in Atlanta as well as our steady stream of international visitors who come to the Arts Clayton Gallery, in a partnership with Clayton County’s tourism programming,” added Linda Crissey, Executive Director of Arts Clayton.

The exhibit will run from August 19th through September 28th during regular gallery hours:  9 am to 5 pm Tuesday through Friday and 10 am to 4 pm Saturday. Admission is free.

The exhibit was made possible by a grant from The Hungary Foundation.

Andrea Lauer Rice is the daughter of a ’56-er, and has been creating multimedia exhibits and educational resources to teach about 1956 for the past 20 years, including: the www.FreedomFighter56.com oral history website, a coffeetable book entitled 56 Stories: Personal Recollections of the 1956 Hungarian Revolution, A Hungarian American Perspective, as well as the Freedom Fighters ’56 graphic novel and FF56 educational computer game. In addition to this local exhibit, she is also involved in the creation of Memory Project: Hungarian American Visual History Archive as well as the documentary film, Loveszek (Shooters).