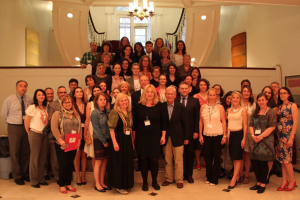 The AMIT (Amerikai Magyar Iskolák Találkozója) of the American-Hungarian Schools Association is an organization designed to support Hungarian Heritage Schools around the United States. Its signature event is the annual methodological conference where teachers, school officers, and parents join together to exchange ideas on ways to grow cultural identity and community in the Hungarian-American youth of the United States.

The 5th annual AMIT conference took place on Saturday, June 10, 2017 at the Consulate General of Hungary in New York  and was hosted by Consul General Ferenc Kumin. This year’s theme was cultivating the relationship between school and home, as well as exploring the role of a parent facilitating the development of the Hungarian language and cultural for heritage learners.

One of our scholarship recipients, Ms. Anna Boldog, Project Manager and Head of International Partnerships for BOOKR Kids, held a workshop on her company’s application for the participating teachers. 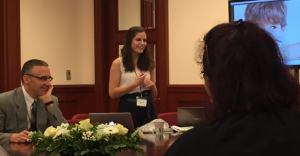 The application allows easy access to over 170 e-books and 300 interactive educational games in the Hungarian language, which aim to improve the language skills of the users. Her presentation was titled: Getting to Know BOOKR Kids, an Online Reading Program.

“By participating at the conference I could meet personally several key figures of Hungarian schools and communities in the US, which makes us keeping in touch a lot easier. In the future I can reach the schools and the parents who might need help in their kids’ education directly.” – Ms. Anna Boldog

Ms. Boldog plans to incorporate the knowledge and new aspects she gained from meeting the bilingual and experienced teachers into the application.

Ms. Katalin Budainé Balatoni and Ms. Ágnes Nagy were our other HIF Conference Support Scholarship recipients. They both presented topics on their project, Így Tedd Rá!, a program that promotes the use of folk dances, games, and arts and crafts when teaching, in the aim to  enhance the learning experience for children. Ms. Balatoni’s presentation was titled: Tapping into the Wonder of Hungarian Folk Dance and Games and Ms. Nagy’s presentation was titled: Supporting Brain Development in Children with Disabilities.

“I could speak about my opinions and knowledge in front of almost the all American-Hungarian teachers. I hope they can convey it to the children, and I can show them how they can build the folk games and folk dances to the syllabus.” – Ms. Katalin Budainé Balatoni

“I met wonderful people who were interested in my presentation. My goal is show to everyone that dance and folk games are for everybody, I mean for every single person. We can choose a game consciously to develop skills.” – Ms. Ágnes Nagy

Ms. Balatoni and Ms. Nagy hope that the program will be integrated into the teaching styles of the American-Hungarian teachers.

Other highlights of the conference included: 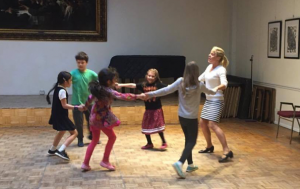 At the end of the conference, organizers and participants gathered to brainstorm next steps for AMIT, and other ways to cultivate the Hungarian-American identity of youth through the work of Hungarian schools.  After five consecutive conferences with hundreds of participants who teach over 1,000 students in the United States, AMIT has hit a new stride, guiding children to embrace their heritage with the help of their parents and their teachers!

Please visit the following websites for more information on our scholars and AMIT: