A Hungarian Hero in the American Revolutionary War

Roughly, 140 Hungarians fought in the war, and one of them, Colonel Commandant Michael Kováts became a war hero.

Maybe, it is a not well-known fact that Hungarians stood out for the United States during the time of some historical turning points. One of these significant events was the Revolutionary War (1775-1783). Roughly, 140 Hungarians fought in the war, and one of them, Colonel Commandant Michael Kováts became a war hero.

Soldiers coming from the Kingdom of Hungary fought bravely for the American freedom. Besides, Hungarian military traditions also had a huge impact on their comrades. For example, the first American cavalry unit was trade in the tradition of the Hungarian hussars by Colonel Commandant Michael Kováts. 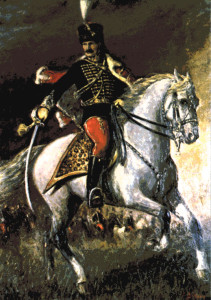 Probably, Colonel Commandant Michael Kováts was born in Karcag in August 1724. He started his military carrier as a hussar, and later he became a soldier of the French Army. He lived a very adventurous life. It is not a proven fact, but when he arrived to the United Sates and applied to the Continental Army, he was not accepted by the Congress so he decided to enter the Pennsylvania militia. He became a close friend with K. Pulaski, who helped his military career. Pulaski was brigadier general and commander-in-chief of George Washington’s cavalry. He proposed a plan for the formation of a training division of hussars. In a letter to Washington he wrote about Kováts: “There is an officer now in this Country whose name is Kovach. I know him to have served with reputation in the Prussian service and assure Your Excellency that he is in every way equal to his undertaking.” Colonel Kováts gave his life for the freedom of America, he was killed in action in a battle on May 11, 1779 in Charleston, South Carolina.

Each year on May 11, the citizens of Karcag commemorate Colonel Kováts as a hero of the American Revolution during a week of memorial services, games, and festivities. In 2004, the delegation of the Cleveland Hungarian Heritage Society presented a statue of him, and they also delivered a proclamation by the United States Commission for the Preservation of America’s Heritage Abroad, created by the U.S. Congress, that recognized Colonel Kovats as a foreign-born hero of the American Revolution.

← Prev: A Hungarian pioneer in North America Next: Admiral of New England →