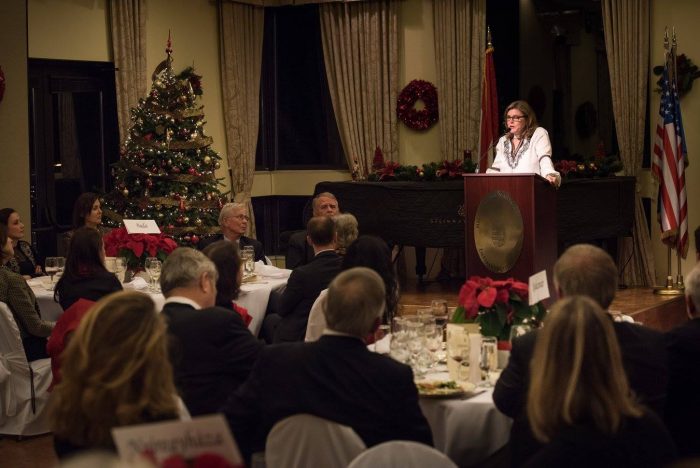 On December 1, 2017 over 100 members and friends of the Hungarian American community  and guests attended the traditional Mikulás Dinner hosted by Ambassador László Szabó at the Embassy of Hungary.

Mrs. Lauer Rice provided debrief of her trip to Hungary and  Subcarpathia in November 2017. As part of HAC’s cultural outreach this fall, the Coalition premiered the documentary “Cold Warriors,” which grew out of the HIF-sponsored Memory Project: Hungarian American Visual History Archive of which Lauer Rice is a co-founder along with Réka Pigniczky.

Coalition Chair Emerita Edith K. Lauer, recognized Ambassador Thomas Robertson, former Deputy Chief of Mission of the US Embassy in Budapest “for representing the best traditions of American diplomacy during Hungary’s historic transition and beyond”. Ambassador Robertson thanked the Coalition for the help they provided in opening doors to work on issues of mutual interest. 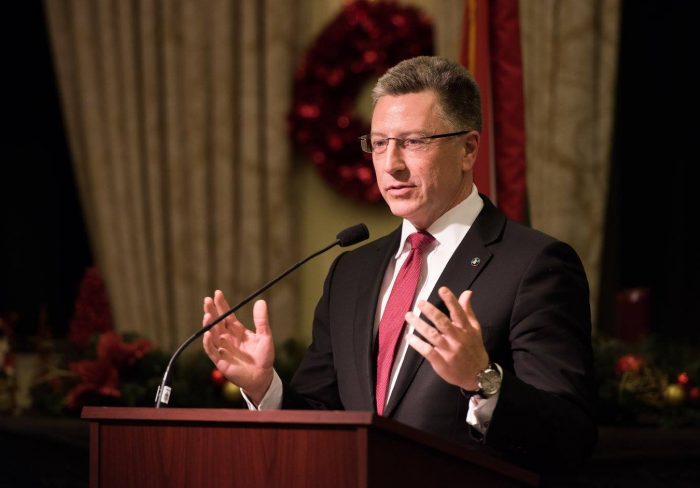 The evening’s keynote speaker, was HIF Board Member Ambassador Kurt Volker, US Special Representative in Ukraine negotiations who reminisced about his time spent in Hungary during the preparation for NATO membership, and the Bosnian war in which Hungary was a reliable partner of the US.

I have had great formative experiences in Hungary, I know Hungary well, I believe in Hungary. And I know what the US and Hungary can do together. – Kurt Volker

In his speech Ambassador Volker listed some challenges that the entire transatlantic community faces today: on the foreign side, there are China, Russia, ISIS and the deeply felt effects of globalization; on the domestic side, there are the elites, populists, threats to jobs, security, tradition, family and values.

The first thing Ambassador Volker stressed about the answers to these challenges is that we need to know who we are; and secondly, we need to take a stand. Thirdly, we have to recognize that not all who do not belong to us are our enemies. Fourth, we must hold our leaders to account and finally, we must be patient.

Hungary and the US are friends who have some differences but these are not fundamental ones of who we are. Thus, to deal with the challenges, we have to face the real enemies and not those we perceive to be. Finally, Ambassador Volker brought up the new education law and minority rights in Ukraine. He stressed, that the citizens of Ukraine have to speak Ukrainian but at the same time the minorities must have the right to speak their own languages.  He added that there is a greater problem that needs to be solved first, which is the changing of borders in Europe by a foreign nation.

These are challenging times. We need to acknowledge our differences and try to overcome them. But we need to focus on what’s important. We need to forgive each other. We have to have a relentless focus on the future, not on the past. We have to fight for what we believe in. And we have to be willing to work hard, as unglamorous as that may be, to achieve our goals together. – Kurt Volker

Photos and event summary courtesy of the Hungarian American Coalition.