This past weekend, the American Hungarian Federation (AHF) celebrated its 110 year anniversary. At the event, HIF Board Member Kurt Volker and HIF Executive Director Anna Smith Lacey were honored with the organization’s service award for their commitment to strengthening Hungarian American relations.

“The anniversary celebration’s moments, traditions and memories have special powers. It increases the power of togetherness. We believe the results of the last 110 years show that our ancestors power of convincing and future ideas moved in a positive direction.” – Zsuzsanna Dreisziger-Stricz 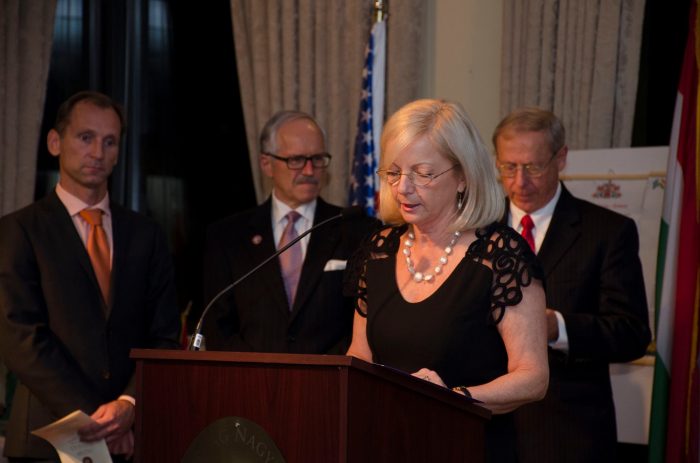 AHF, founded in 1906, is a non-partisan, non-profit organization that represents the interests of its members and a cross-section of the Hungarian-American community. Among other projects, AHF raised and donated 11.7 million dollars in 1956 to help support Hungarian refugees who had fled the oppressive Communist regime.

The organization’s motto, “Faithful Unto Death” is taken from a letter written by Hungarian Colonel Commandant Michael Kovats de Fabricy to Benjamin Franklin in offering his full-fledged service to Americans  during the Revolutionary War. In the 21st century, AHF continues to be faithful to helping those in need and supporting educational and cultural programs which preserve Hungarian culture.

In his remarks, Dr. Peter Szilagyi, Deputy State Secretary for Hungarian Communities Abroad, lauded the work of AHF in encouraging Hungarian immigrants to America to be helpful in building strong American communities, while at the same time preserving and taking pride in their Hungarian heritage. He quoted the great István Széchenyi in saying, “For one everything is difficult, but to many nothing is impossible.” He continued that it is on this foundation that AHF has carried out its work in supporting the Hungarian diaspora.

The evening concluded with the handing out of AHF’s Service Award to a number of Hungarian officials who are actively working with Hungarian-American communities. Among those honored were Attila Micheller, Gabriella Koszorus-Varga and Ferenc Bollok, Imre Beke, the Fedor family, Tamas Hilberth, Andras Evva, Sandor Murray, former President of the Hungarian Academy of Sciences Szilveszter E. Vizi, and Istvan Kun-Szabo. 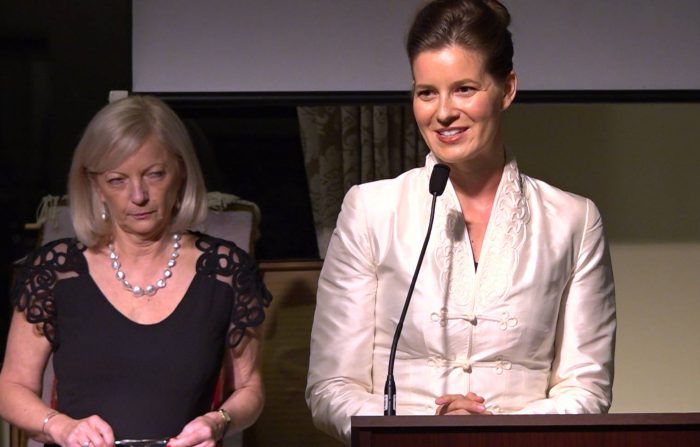 HIF Executive Director Anna Smith Lacey was honored for her outstanding work and efforts strengthening Hungarian-American cultural and educational ties. In her remarks, Anna Smith Lacey thanked AHF for their century-long work in America the fruits of which the current generation gets to enjoy.

HIF Board Member Ambassador Kurt Volker was also honored for his outstanding achievements as a US national security leader and for his longtime commitment to deepen Hungarian-American relations. Upon receiving the award, Kurt Volker wrote that:

“Hungary’s legacy as a major European state – and at various times and in various ways a monarchic power, a beacon of civilization, a victim of repression, a nationalist protector of Hungarian identity, a democracy, a friend and Ally of the United States – is often poorly understood. Likewise, as a small nation with a unique language, culture, and history, the preservation of Hungarian identity from generation to generation requires tireless and focused work. The American Hungarian Federation has taken on both of these challenges with exemplary determination and unfailing warmth, embracing both its Hungarian identity and its American homeland. Indeed, the principles and ideals of democracy, shared equally by Hungarians and Americans, is a solid foundation for building stronger relations between the people of both countries, not to mention their governments.” – Ambassador Kurt Volker