HIF’s second annual Young Hungarian Leaders Program (YHLP) concluded on April 7th with 11 participants bringing back a renewed confidence in private initiatives and a deeper understanding of republican self-government to their native Hungary. 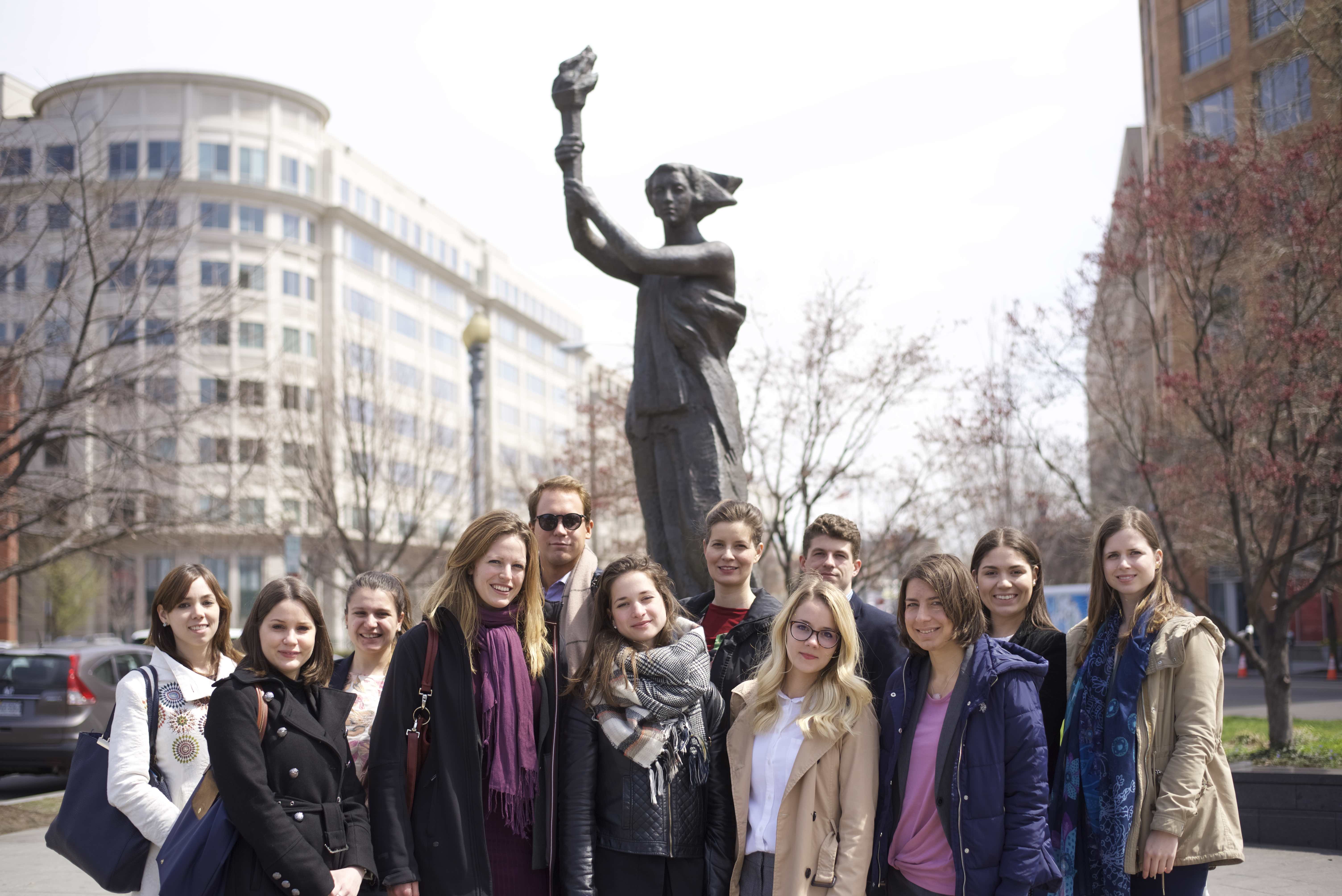 The 2018 Young Hungarian Leaders Program co-organized with Meridian International Center, offered eleven Hungarian graduate students and young professionals a 5 day intense program in Washington DC.  Through a mixture of briefings, readings, study sessions, workshops, and meetings with think-tanks, U.S. government representatives, as well as site visits, participants deepened their knowledge of the history and evolution of the American constitutional order, and a representative government necessary for a free and prosperous society. The program also focused on various elements impacting US public policy making today.

The program kicked off with a comprehensive tour of Washington, DC using major landmarks to underscore democratic concepts and representations of separation of powers in the federal city. Participants then travelled to the George Washington Leadership Institute at Mount Vernon where they learned about the classical virtues (self-reflection, balance and perspective, true self-confidence and genuine humility) of America’s first president. Participants also enjoyed a special tour of Washington’s Mansion and the estate, which provided a practical understanding of the Founder’s era.

“After learning about George Washington’s character-driven leadership and discussing the main challenges young leaders have to face in Hungary, I felt like this program prepared me for leading and taking initiative.”

To provide a complete overview of the American system of limited government, checks and balances, separation of powers, the U.S. election system and the way campaigns are run in America, Dr. Jeremy Rabkin of George Mason University, Ms. Stephanie Salvagno from US Federal Government Affairs, George Bogden from the Center for the Future of Liberal Society, and John Fonte from the Hudson Institute and Dr. Stephen Billet from George Washington University gave thorough briefings followed by Q&A. The splendid Meridian House, an architectural jewel in Washington surrounded by beautiful historic gardens, was the venue of the day-long discussions elevating both mind and spirit.

“The discussions and the lectures all shaped my understanding of the United States. They changed the way how I think about the politics. Not only about the American politics, but European too.”  – Dóra Garai

Ilya Shapiro from the CATO Institute and Mark Milosch of the U.S. Helsinki Commission talked later to the participants about the role of Federal courts and how legislation influences the executive branch. The week also included an intense schedule of site visits including at the U.S. Capitol, the Supreme Court and the State Department, all of which helped paint a comprehensive picture of United States government, past and present.

“My favorite part of the program was that it showed how checks and balances work in the U.S. It was fascinating to see how legislative, executive and judiciary powers can impact each other’s work and keep them in check should one of them overstep their responsibilities.” – Márton Kovács

Thursday concluded with an in-depth briefing and overview of US-Hungary relations by Ambassador László Szabó and the Embassy staff as well as an uplifting tour of the splendid new Hungarian Embassy building.

Think tank site visits focused on understanding how independent civil society organizations shape the American policy-making process. Anna Voloshin at the McCain Institute explained how an innovative approach to think tanks can turn ideas into action, John York at the Heritage Foundation explained the system of checks and balances in practice and the interplay of principles and politics, Marion Smith at the Victims of Communism Memorial Foundation focused on America’s anti-communist foreign policy tradition and the realities of human rights advocacy in Washington and on campuses today, and Christopher Bedford of The Daily Caller News Foundation presented on the importance of an informed citizenry and the power of quality investigative journalism.

“Coming from Eastern Europe, my understanding of the democracy is shaped by our history and way of thinking. Learning about American Democracy made me realize to what extent this word is sometimes misinterpreted.  Now I better understand how Americans think, their confidence, and their constant effort to shape their own future. I am really grateful for this opportunity, the entire week was full of inspiration!” – Lilla Zalai

The program concluded with a group discussion and reflection on the ideas heard throughout the program. Putting their knowledge from the week to use, the participants took this time to pitch a joint project idea, a possible new initiative to Hungarian-American relations to HIF’s staff.

“YHLP was a seminar truly tailored to future leaders because we gained knowledge about the politics of the world’s most influential economic and military power and also worked on projects aiming to strengthen the relationship between the U.S. and Hungary. We brainstormed a lot on how to ‘transfer’ the American mindset to Hungary and how to become effective leaders.” – Alíz Nagyváradi

Read what else participants thought about the program:

“I learned that each individual has rights and chances to be involved in politics across the world. It is our responsibility to make the world a better place.  It could mean small steps that are worth to have a big impact on achieving goals.”

“Thanks to the program, I got a full overview of the institutional roles and realized the importance of fundraising and lobbying in US politics and society. I would say everything I heard during the week, made it easier for me to see the United States as a whole, with its legislative executive and judicial branches, their overlaps and connections.”

“The briefings and lectures showed us how the three branches work separately and support each other. We learned about the link in between these institutions as well. I really appreciated the well structured schedule of the program. The pieces of the week build up to a whole picture in the end of the program.”

“I felt the program took us on a journey, from the very beginning of the United States to our current days, by presenting the founding fathers’ conception as well as the most recent electoral circumstances.”

“The most important thing I learned was that change is possible, that we can change ourselves, people around us, with faith, optimism, consistency, and hard work. That we cannot blame others for the lack of progress because we are capable of bringing it about.”

At the Jefferson Memorial

Martin Kovács at the Supreme Court

Alice Nagyvaradi at the Supreme Court

At the Tidal Basin

At the rooftop of the Victims of Communism Memorial Foundation