The project aimed to educate the Hungarian-American communities across the West Coast about the life and music of one of the greatest Hungarian composers, Zoltán Kodály.

“We introduced the Hungarian and greater American public to the music of Kodály and his key life events. The motivational factors that determined and led him to the creation of his internationally-accredited art.” -United Magyar House

Zoltán Kodály was a three-time Kossuth Prize-winning composer, who spent his life devoted to studying music and improving the music education system in Hungary. Growing up in Kecskemét, Kodály began his musical career by gathering and composing Hungarian folk music from all around the country. He is best known for developing the “Kodály Method of Musical Education,” through which he created a large amount of teaching methods and composed plenty of music intended for children’s use.

His legacy remains through many of his highly influential books and his profound impact on musical education both in and outside his home country.

According to the New York Times,  “Kodály‘s contributions to folk music and musical education seem as important today as his compositions. He was a good musical citizen, not just of Hungary but the world, and he should be honored more for the generous breadth of his achievements than for their depth.”

In the spirit of his fascinating life story, the United Magyar House invited artists that also possess and expertise in the life and music of Kodály: László Stachó, Senior Lecturer at the Liszt Academy of Music in Budapest, and Zsolt Dánielfy, Performing Artist of the Csokonai Theatre of Debrecen. All three performances received great feedback from the attendance and were a big success in the Hungarian American communities. 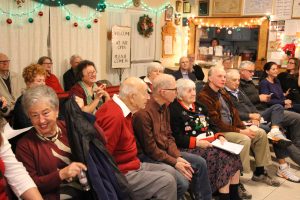 ← Prev: Péter Gerendás Inspires Audiences with a Fusion of Music and Culture Next: Hungarian Association in Cleveland Hosts Literary and Artistic Experience →