The Embassy of Hungary hosted Regional Diaspora Meetings in Washington over the weekend of May 19.

Over 40 Hungarian-American organizations participated in the day-long discussions on current and brand new projects shaping the future of the Hungarian diaspora in the U.S. The program, hosted by Ambassador László Szabó included presentations by Dr. Zoltán Kádár, chief of staff of Hungary’s State Secretariat for Diaspora Policy, on the Mikes Kelemen, Kőrösi Csoma Sándor (KCSP) and  Julianus Programs as well as the annual Diaspora Council meetings in Budapest and grant opportunities offered by the Bethlen Gábor Fund. 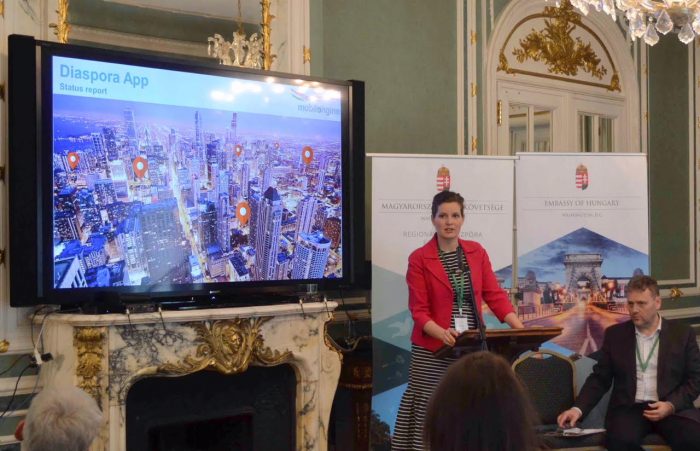 HIF Executive Director Anna Smith Lacey gave an update on the status of developing the smartphone application for Hungarian sites, points of interest and organizations in the U.S. which will be focus-group tested in the upcoming months and the beta version will be launched later this fall.

Presentations by diaspora leaders focused various ongoing programs that HIF is or has been an important supporter of, such as the ReConnect Hungary  Program, summer camps of the Hungarian Scout Association in Exteris, the Rákóczi Association’s Diaspora Program, an update on the Kossuth House in Washington DC, and the Hungarian Hub’s recent Diaspora Workshop in Daytona Beach, FL, the Memory Project  and the HATOG conference series.