HIF proudly supported the Art of Hungary exhibit displaying a century of “Rebellion and Revival” in the visual arts viewed by thousands of visitors at the Boca Raton Museum of Art. HIF Executive Director Anna Smith Lacey joined the exhibit’s supporters for the museum’s special Sponsor Recognition dinner and  former US Ambassador Nancy Brinker’s talk on the role of art in cultural diplomacy.

The “Art of Hungary” pays an important tribute to Hungarians’ passion for freedom and independence which culminated in the 1956 revolution against communist dictatorship 60 years ago. We hope that audiences of various ages will come to appreciate how Hungarian artists could establish basic human truths, often in spite of oppression, and how the arts can incarnate the authenticity and creativity of a free people. – Anna Smith Lacey 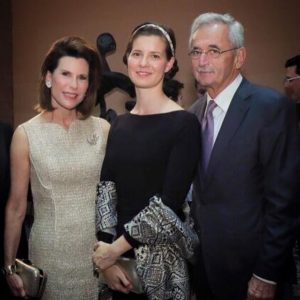 This special art exhibit from Budapest includes works of art by Hungarian artists, with such figures as André Kertész and László Moholy-Nagy, and provides a fascinating microcosm of the social and political turmoil that was raging across Europe, from the late 19th century, through WWI and WWII to the collapse of the Soviet Era, giving rise to the birth of the avant-garde.

Dr. Steven Mansbach, Distinguished University Professor and Professor of the History of Twentieth-Century Art at the University of Maryland, shared his scholarship on Central and Eastern European Art through The Art of Hungary, at the Museum’s Boca Talk program on November 15. 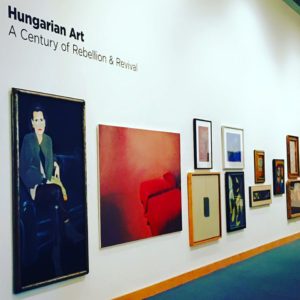 A century of Rebellion and Revival in the Arts

It gives me so much joy to share my collection of Hungarian paintings. I’m so excited that it is being presented in this broader context with works by many of the great Hungarian photographers of the last century. – Nancy Brinker

In partnership with the Hungarian Museum of Photography in Budapest, the Museum also presented an overview of the history of photography in Hungary with a selection of over 30 works from the early to late 20th century by photographers such as André Kertész, László Moholy-Nagy, Brassaï, Robert Capa, György Lõrinczy, and others. Péter Baki, director of the Hungarian Museum of Photography, is our guest curator for the exhibition. 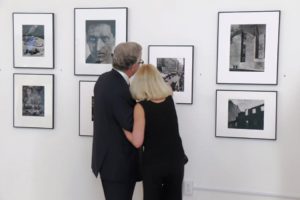 The exhibit also features the photo exhibit of Sylvia Plachy, who was born in Budapest and fled as a refugee at age thirteen to Austria after the Hungarian revolution in 1956 before moving to the US two years later. Her photo essays and portraits have appeared in The New York Times, New Yorker, and Fortune, and she was staff photographer at the Village Voice. She has had six books of her work published and is in the collections of the Museum of Modern Art, Metropolitan Museum, San Francisco Museum of Modern Art, Houston Museum of Fine Arts, and other institutions. Her compatriot, the legendary photographer André Kertész, was a friend and mentor and Plachy is often called his artistic heir for her poetic street photography.

To bring the suite of Hungarian exhibitions up to the present, the Boca Museum’s Curator of Contemporary Art, Kathy Goncharov, worked with Szilárd Cseke, the Hungarian representative to the 2015 Venice Biennale, as he constructs an entirely new site-specific installation. Since the mid-1990s, Szilárd has been creating installations that deal with themes of migration and identity assembled from found objects and ephemeral industrial materials with moving parts and neon lighting. 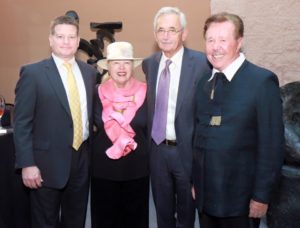