Noémi Veronika Szakonyi is a graduate student at New York University (NYU), pursuing her Masters of Fine Arts degree in Filmmaking at Tisch School of the Arts. She received HIF’s graduate scholarship during the spring semester 2018 to support her studies. 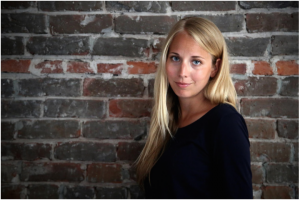 Upon enrolling in NYU Tisch School of the Arts, Noémi was hoping to gain a lot of experience and valuable knowledge, be inspired as a human being, and reinvent herself as an artist. This entire school year, especially the second semester, has surpassed all her expectations.

“Not a single day had passed without learning a new thing, having a fresh idea, and making steps toward being a responsible, truly engaged artist. This past semester I learned how to write a script, how to put words and action in the service of storytelling. This was very important to me, because I was always insecure when it came to writing.”

In addition to writing, directing, producing, editing, and sound mixing their own short narrative films, Noémi and her fellow classmates got to work on six other short films in different positions. Being the cinematographer to one of her classmates was an incredible opportunity for her as it was both a great experience and a huge artistic responsibility. The faculty calling her cinematography skills outstanding at the end of the semester encouraged her to practice this profession and be an even more cinematic, visually engaging director.

“I successfully overcame a major part of my fears and I can confidently say, that I could be a good writer if I continued writing and polishing my works. I also mastered my skills in editing and sound design and became a better team worker. Filmmaking is all about teamwork, and this program puts a strong emphasis on that.” 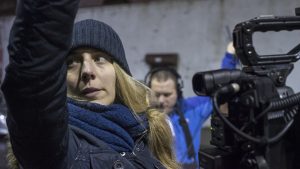 Noémi’s enthusiasm was boosted this past semester by meeting and having private discussions with icons such as Ethan Hawke and Claire Danes. By being able to participate in masterclasses and screenings, she also saw Wim Winders’ new documentary about Pope Francis, where she even had a talk with him. Last but not least, Noémi praises the amazing faculty, the talented and engaged professors of NYU, for investing time, energy, creativity, and love in their students and helping them open up and find their real, inner voices.

“Without the HIF Graduate Scholarship, I would not have been able to complete this semester and have a film of which I can be proud and can send to many festivals around the world. The scholarship covered a big part of my tuition fee and helped me believe in myself and verify that I am on the right path.”

A Special Encounter for a Unique Project

Noémi’s special project was influenced by a rather touching encounter after the screening of a previous documentary of hers titled “Condemned to Live” in the Hungarian House in New York City. During the Q&A an elderly man rose up in the first row with tears in his eyes.

“He told us that he was kept in the same prison, then his voice started to shake. His wife grabbed his hand and put her face into her palm. He told us that he wants to tell his story. It came to me at that very moment, that I have to make my special project about him. I conducted a life-interview with him.”

Noémi has already edited a short reportage about him as a special project, but she would like to continue her work and look for more elderly Hungarians in New York City who could tell her their stories.

“I am very grateful for The Hungary Foundation for the generous scholarship I received, because it helped me have faith in myself and realize the responsibility of art in our world and also shaping my soul, mind, and body of work.”