Early in 2015, Andrea Lauer Rice (author and multimedia producer) and Réka Pigniczky (journalist and documentary filmmaker) founded the Memory Project: Hungarian American Visual History Archive. To date, they have traveled to 14 locations in the United States, Germany and Hungary and have conducted 90 interviews with Hungarian immigrants to the United States following the defeat of the 1956 Revolution and after World War II. 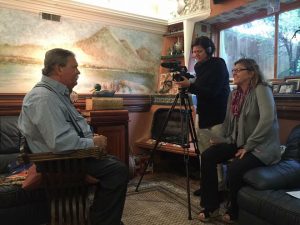 Everyone has a story to share that often yields incredible insights into the world and the times around them. Stories from the Hungarian American community are no exception. In many ways, these stories of immigration to the US are very similar to other ethnic groups from the European Continent that came after the World Wars. But the Hungarian community also has a rather unique experience of immigration due to the ca. 35,000 Hungarians coming to the US following the Hungarian Revolution of 1956.

The Memory Project helps preserve the history of the Hungarian American community by sharing personal stories like no other project or medium can. The Memory Project is the largest community-wide project  to gather video interviews and thus maintain an accurate account of history.

“As a historian, I very much believe in history being preserved not just on paper and in writing, but visually and to the media, and so I think this is as important as writing a book.” – Katalin Kádár Lynn, Historian, DP

The goal of the Memory Project is to have this oral history project become part of a major academic repository in the United States, with transparency and accessibility to all scholars. To satisfy academic requirements, we would need to increase the number of interviews to ensure there is a representative sociological sampling within the model we designed.

In addition to the academic piece, the creators of the project are interested in sharing many of these stories with the local Hungarian American community so that young Hungarian Americans can learn about their heritage from these personal histories. In order to share these stories, Memory Project now has a custom, searchable website to house the collection pertaining to ’56-ers as well as Displaced Persons, available at:

Memory Project now also features a 5-part video installation and various compilation videos from the interviews that were used at a number of commemoration events in the Fall of 2016. The videos are in English and Hungarian, with Hungarian subtitles. This five-part series ran from October 23 – November 4, 2016. Available online at http://index.hu/kultur/memory-project/

The Memory Project is funded by The Hungary Foundation, Hungary’s 1956 Commemoration Fund and US-based crowdfunding.

← Prev: Cleveland-based Bocskai Radio Acquires New Equipment from HIF Grant Next: HIF Scholarship Recipient László Aradvári Returns to Chicago To Give Back to the Community →