Every semester, HIF offers the opportunity for undergraduate and graduate students to intern with the foundation gaining substantive work experience while enjoying the bustling life of the US Capitol. This fall HIF is hosting Joseph Bebel of Georgetown University. 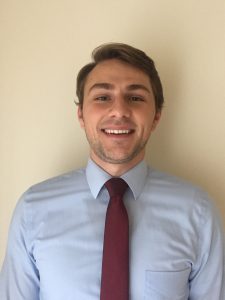 Joseph Bebel is currently a first-year Master’s student at Georgetown University studying Russia and Eastern Europe. He is primarily interested in the politics of Central Europe and the important role the region plays in the larger European picture. While working with HIF, he hopes to gain experience working with a non-profit and better understand the relationship between the United States and Hungary.

Joseph was born in Stuttgart, Germany to a U.S. military family. His father, a Colonel in the United States Air Force, was stationed in Germany at the time. As a reality of military life, Joseph and his family moved around quite often during his childhood. It was not until his father’s retirement that they finally settled down in Kansas City, Kansas. Upon graduating from high school, Joseph enrolled at Brigham Young University (BYU) in Provo, UT, where he eventually graduated with a degree in European Studies.

Joseph’s connection to Hungary began with a two-year service mission for the LDS (Mormon) Church. From 2012 to 2014, Joseph served all across Hungary in cities like Budapest, Eger, Szeged, Debrecen, and Pápa. He immediately fell in love with the Hungarian people and culture, as well as the cuisine. While there, he learned to speak Hungarian in hopes of better understanding the history and culture of the country. Once he returned to BYU, his work in the European Studies program focused on Hungary, Poland, and the EU. While at BYU, he had the chance to return to Hungary as an intern at the U.S. Embassy in Budapest. The experience was very rewarding as he was able to further develop his language skills and work closely with public affairs and the press. He hopes to further bolster his knowledge and experience as an HIF intern and a student at Georgetown.

When I discovered HIF, I was very excited for the chance to reconnect with Hungary and actively work in improving cooperation between Hungary and the United States. Before beginning my work, I did not realize how important HIF was in providing Hungarians opportunities here in the U.S. and preserving Hungarian culture. I am very impressed with the work of the foundation, and am excited to do my part in helping HIF carry out its mission.

In the future, Joseph would like to work in policy and diplomatic affairs. He has a keen interest in the work of D.C.-think tanks such as CEPA and the Atlantic Council. He is also fascinated by U.S. government relations and efforts in Europe (primarily Central and Eastern Europe) and would welcome the chance to participate in that work. It is his hope that HIF will provide a solid foundation for his future career path.

My writing and analysis skills have already improved and the chance to speak Hungarian is very valuable. I am beginning to better understand what all goes into U.S.-Hungary relations, and gaining insight of that relationship from a non-profit has been interesting. I am excited for the future prospects of this internship as I gain a greater appreciation for the work of Hungarians contributing to American culture and society.