This semester, Gábor Márki began studying toward a Master of International Affairs at the Austin W. Marxe School at Baruch College in New York. He has been selected from a distinguished pool of applicants, to join the College with a Marxe Excellence Scholarship. Baruch College, ranking  #1 in social mobility for the fourth year in a row, is part of the City University of New York, the largest urban university in the United States. 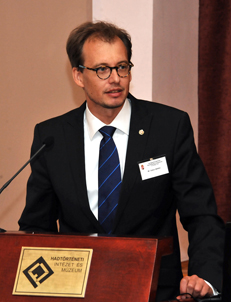 Gábor has been given the unique opportunity to work together with bright fellow students and young professionals from a dozen countries worldwide and the US in order to gain a deeper understanding of complex international organizations and how policy positions are developed therein. The faculty provides top-tier training dedicated to responsible leadership, civic service and community engagement.

“Coming into this very international and dynamic environment is extremely inspiring. The School has a close relationship with the UN and several other NGOs, Government Offices and Agencies. It is a perfect combination of the opportunities of a huge university organization with over a quarter million pupils and the small group of classes and diversity of students who take pride in working together as a cohesive cohort.”

Born in Hungary, Gábor graduated in Germany and spent 20+ years in leading positions in Germany, Slovakia, Austria, and Hungary. He is an economist with experience in executive and policy-making positions in corporate, government and diplomacy in Europe and the Middle-East. In 2010 he was appointed Dep. State Secretary at the Ministry of Defense and National Armaments Director of Hungary at NATO. He was a diplomat at Hungary´s Embassy in Israel. After finishing his mission as Head of the Economic Section in Tel Aviv, he relocated to New York. Prior to his studies he also managed his consultancy in Germany and a Publishing House in Hungary.

In addition to his studies, Gábor is also a Graduate Teaching Assistant at the Executive Master of Public Affairs Faculty.

“Connecting people, building bridges between cultures and transforming knowledge into development was always my dream and education was my way to success. The Curriculum will give me the necessary knowledge to structure my professional experience, the networks, and tools to promote development in the world. I enjoy tutoring and studying at the same time, and it helps me become more efficient. I am even thinking about turning teaching later into a full-time profession.”

Economic reconstruction has been a constant part of Gábor´s work since the mid-1990´s. Since his diplomatic service in the Holy Land, Gábor has also been engaging himself in the rights of religious minorities. He focused his research on the transatlantic cooperation between Hungary and the US in the reconstruction and the establishment of special economic zones. He would like to showcase the opportunities for a bilateral Hungarian-American cooperation in the economic re-animation of areas of origins for religious and ethnic minorities in war-torn regions.

Upon receiving his master’s degree, Gabor would like to work for an international organization and encourage the creation of “Safe Special Economic Zones”, as well as efficient resource management and the use of recent technologies (e.g. video conference, telelearning) in combating the traumas of survivors.