Ambassador Dr. László Szabó welcomed the guests, underlining the successful economic and improving relationship between Hungary and the United States. After the dinner, a special video made for this occasion presented  the 25th anniversary of the passing of József Antall, the first democratically elected Prime Minister of Hungary after the regime change.

Coalition President Andrea Lauer Rice spoke about the powerful bond of the Hungarian American community, and their opportunity to accomplish greater things together, to overcome difficulty and to support each other, and the valuable community of the CIP alumni. She presented the accomplishments of the Coalition’s recently renamed John N. Lauer Leadership Training Program (LTP) – formerly called Coalition Internship Program – and its role in offering participants the insight into civic engagement in the US as well as putting this model into practice at home, in their own communities. 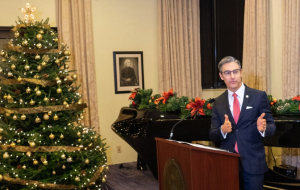 The evening’s keynote speaker, Atlantic Council Executive Vice President Damon Wilson spoke warmly about his special relationship with Hungary and the Hungarian American community which goes back decades and underlined the importance of the United States’ engagement with its friends and allies:

“As we look forward next year to celebrating 30 years since the Berlin Wall fell and 20 years since NATO enlargement, we must mobilize our alliance, develop and implement strategies to bolster a free Central Europe, and reinvest in the people who bring to life the special ties between our countries.”

Mr. Wilson presented several ideas to bolster the US-Hungarian alliance, and to deepen the understanding between the two nations, as well as building a strategic partnership based on common values and goals. The Atlantic Council’s Central Europe Initiative and its collaboration with the Hungary Foundation, in many ways, does just that by aiming to build communities of influence invested in the US-Hungarian alliance. He quoted Ambassador Dan Fried by concluding that:

“Scolding is a waste of time. Handwringing is lazy. The US needs to show up.” No attacking. No complaining. Rather together, we start building.”