This year, for the 40th time since its inception, the Hungarian Communion of Friends (Magyar Baráti Közösség, or MBK) held another successful and well-attended Itt-Ott Conference at picturesque Lake Hope in Ohio bringing together the Hungarian American community for a week-long series of discussions on Hungarian literature, traditions, as well as emigration patterns and identity issues.

We are grateful for the support provided by The Hungary Foundation, which has been instrumental in its success of the conference. – Hajnal Minger

The 40th ITT-OTT gathering brought together Hungarian Americans young and old for a series of programs that left participants with a lasting memory.

For over thirty years, the ITT-OTT conference has been presenting high level lectures and discourse while also providing an opportunity for families to vacation together. The joyful sound of children is a vital element of the gathering. At Lake Hope everyone gets rejuvenated and recharged with enough Hungarian spirit to last throughout the year. The week-long conference this year was held from August 13-20, 2016, at Lake Hope State Park, McArthur, Ohio. One hundred forty participants were present, among them many children, and young MBK-members. Beside the regular participants, a handful of Hungarian-Americans participated in the landmark event of receiving the Hungarian Citizenship, administered by the Consuls present from the Hungarian General Consulate of Chicago.

The cornerstone of the event was the program of morning lectures. These provide fuel for important debate and discussion that last well past the morning hours, from relaxation time through evening campfires. The camp also offer sChildren’s programming alongside the morning schedule. After communal lunches, participants can rest by the beach, swim or take out a boat. The evening presentations are usually musical, literary and entertaining in nature. 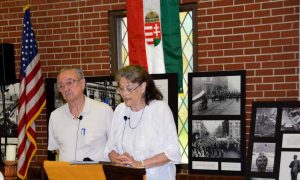 Ágnes and László Fülöp presenting at the 1956 panel

The program encompassed lectures on Hungarian literature, religious state of affairs, traditions, as well as emigration patterns and identity issues. Members and guests of MBK revisited the events of the 1956 Revolution with special emphasis on its impact outside of Hungary’s borders.

The evenings were filled with community building events, featuring music, dance, theater, and film screening. 2016 being the fortieth anniversary of the conferences at Lake Hope, issues of the organizations past, and its potential future, were also discussed. August 20, the national holiday of Hungary was also commemorated. There were also programs and lectures for English speakers.

The broadcast of an interview with MBK past President Peter Kovalszki, and newly instated president Hajnal Minger, conducted by Zsolt Molnár can also be accessed here: http://www.bocskairadio.org/2015-os-itt-ott-talalkozo