With the support of HIF, Mr. Márton Gömöri, junior research fellow at the Hungarian Academy of Sciences held talks on relativity and electromagnetic fields with the Southern California Philosophy of Physics Group and the Center for Philosophy of Science. 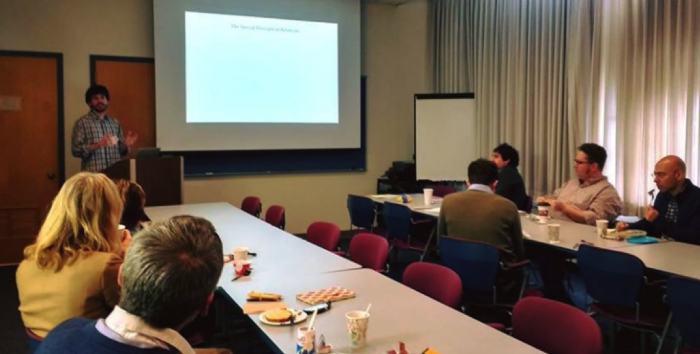 Mr. Gömöri at the Center for Philosophy of Science in Pittsburgh, PA

The opportunity to present research findings and receive feedback from intellectual and scholarly colleagues of the same field is of utmost importance for any junior research fellow. The Southern California Philosophy of Physics in Irvine, California and the Center for Philosophy of Science in Pittsburgh, Pennsylvania both offer opportunities for philosophers and scholars alike to present talks in the aim to foster the emergence of new work in the philosophy of science.

Mr. Gömöri presented talks on the relation of the relativity principle and covariance as well as the persistence of the electromagnetic field.

“I received important comments and feedback on my research from top scholars of my field. I also made important personal connections that might be beneficial not only for me, but hopefully for the whole philosophy of science community in Hungary in the future.”

The feedback and comments that Mr. Gömöri received were constructive and invaluable towards the advancement of his work, which resulted in him sending one of his papers to a journal for publication. He also came by some ideas about a new direction in which his current research could be continued.

“I got to know young, talented scholars of my field, some of whom I stayed in touch with, and this could even lead to new collaborative research.”