László Szerencsés from Bicske, Hungary arrived to Washington this fall and will spend 4 months at the Center for European Policy Analysis (CEPA). With HIF’s support, the Hungarian American Coalition’s Internship Program (CIP) will be hosting seven interns in 2017 to provide first-hand experience at various Washington-based institutions. Internship participants are also expected to complete a Coalition research project that enables them to become familiar with the Hungarian-American community. 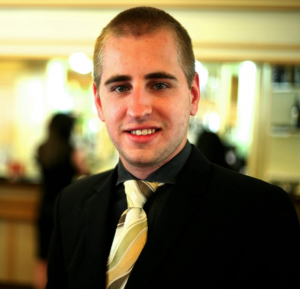 László Szerencsés is currently pursuing his graduate studies in Global Political Economy at the University of Kassel, Germany with the scholarship of the German Academic Exchange Service (DAAD). He also holds an undergraduate degree in International Relations from Budapest Business School. After successfully managing a student organization called Global Youth Diplomacy in Budapest, he became an intern at the Cabinet of the State Secretary for Cultural and Science Diplomacy at the Ministry of Foreign Affairs and Trade in Hungary in early 2015, and during his studies in Kassel he also did an internship at the Embassy of Hungary in Berlin, Germany in the summer of 2016.  Afterwards, under the umbrella of the European Academy of Diplomacy (EAD), he was engaged with research in the field of refugees in Europe, especially in the V4 countries. 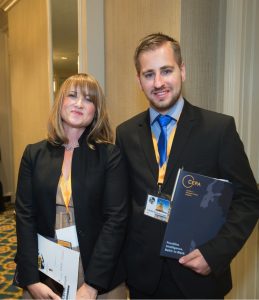 László Szerencsés with Ilona Teleki at the CEPA Forum 2017

Prior to his internship at CEPA, in the summer of 2017, with the scholarship of the International Center for Development and Decent Work (ICDD). László spent six weeks in Kosovo to conduct interviews with civil society organizations about their involvement in the opposition of the Kosovo Power Project, a potentially World Bank financed coal power plant. His main interests are US perspectives on migration and US foreign policy in the Western Balkans.

As an open-minded professional in international relations with a strong academic focus on Germany, migration, and the Western Balkans, I am ready to broaden my horizons toward the USA. Understanding transatlantic relations from the inside will be a milestone in a successful career in diplomacy, which is the profession I would like to dedicate most of my adult life to pursue. – László Szerencsés