Attila Szabó is the Deputy Director of the Hungarian Theatre Museum and Institute of the Petöfi Literary Library. Mr. Szabó received an HIF Conference Support Scholarship to take part in the Rehearsal for Truth Festival put on by the Vaclav Havel Library Foundation (VHLF) and Bohemian Benevolent and Literary Association (BBLA).

“I wish to thank again the support of HIF both for the chance for me to take part in this professional forum, and also for supporting American professionals whom we could not otherwise invite to our theatre conference in Budapest. I truly hope in the continuation and extension of these exchanges which are highly important in this day and age to refine our knowledge about the two countries.”

In late September, VHLF and BBLA sponsored a multinational Central European theater festival in New York entitled Rehearsal for Truth. This was the pilot year of the festival and performers from the Czech Republic, Poland, Slovakia and Hungary participated in the five-day event. Each day, one of the participating countries hosted a panel of experts followed by a traditional ethnic theater performance. A number of exhibits were also open for the duration of the festival, displaying the excellence of the arts in each country. 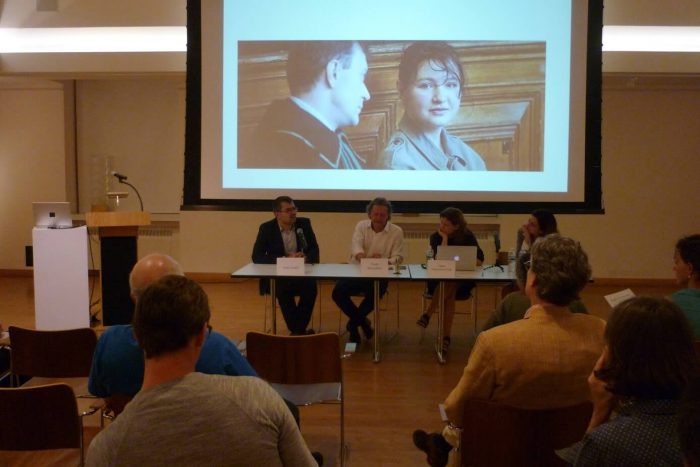 The Hungarian portion of the festival began with the panel, “No Strings Attached? Pros and Cons of Private Government Support for the Arts.” Deputy Director of the Hungarian Theatre Museum and Institute of the Petöfi Literary Library, Attila Szabó was a discussant on the panel along with writer Agata Adamiecka-Sitek from the Zbigniew Raszewski Theatre Institute and the Head of the MFA Directing department at the New School for Drama, Tea Alagic. Mr. Szabó contributed greatly in sharing his experience with government funding for the arts in Hungary and how it could be improved.

“The main problems the panel focused on were the relationship between theater systems and artistic output and the factors enabling and limiting theater autonomy, which represents one of my research topics that I have pursued. I am pleased to have had this opportunity to give a short yet hopefully nuanced report on the main issues the Hungarian theater system is facing in our time.”

Following the panel, a theater performance Otthon/Home was put on by the innovative, Budapest-based theater company Dollar Daddy’s. Mr. Szabó played a central role in introducing the show, producing the English translation, and moderating a panel of actors following the show. Overall, the performance was a success and well-received by New York’s American and Hungarian patrons alike.

“Providing high-quality translation during the performance was the pivotal point for making the show accessible to the audience. To give a historical context to this performance before the discussion with the actors, I gave a brief introduction on the history of intimate theater forms and apartment theater in Hungary, connecting the work of Dollar Daddy’s with the famous Squat Theater in New York. The performance received favorable feedback, the Hungarian spectators in New York were especially grateful for the chance of seeing such innovative theater from Hungary.”

Mr. Szabó hopes the success of the pilot year for the festival will position it as an annual event in promoting Central European cooperation on the arts and raising awareness here in America. Mr. Szabó also had the chance to meet with a couple American theater directors in discussing collaboration on future projects. One of the projects mentioned was to compile a list of American and Hungarian plays that could be translated into both Hungarian and English. Another project consists of gathering the historical records from New York’s Squat Theater, that was founded by Hungarian expats Péter Halász and Anna Koós, among others.