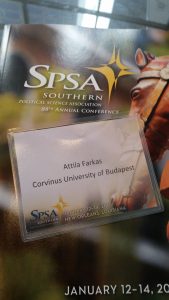 I am very grateful for HIF’s support. It was truly amazing experience. – Attila Farkas

Attila Farkas, a graduate student at Corvinus University of Budapest presented a paper for the first time to an international audience at SPSA. His primary research area focuses on the radical right and radicalism.

This was my first conference abroad. I had a chance to look into how the researchers in the United States are writing scientific papers which is important, because political science is the most advanced in the United States. I have heard new approaches and research methods. It was a great opportunity. – Attila Farkas