HIF Director Anna Smith Lacey spoke to over 800 guests, including Members of Congress, Ambassadors, US government officials and civil society leaders at the 50th Anniversary Gala of The Fund for American Studies, an educational nonprofit that is changing the world by developing leaders for a free society. 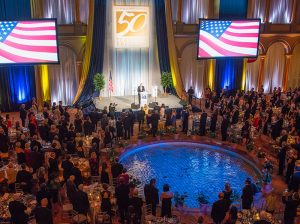 At the end of September, alumni, supporters, and leadership came together to celebrate the 50th anniversary of The Fund for American Studies excellence in teaching and preserving freedom. Ambassadors, members of Congress, and other government officials were also in attendance. HIF Board Member, Ambassador Kurt Volker was also in attendance.

Founded in 1967, TFAS has worked with almost 17,000 students, representing 144 countries, in developing future leadership for a free society. The core vision of TFAS is to “to win over each new generation to the ideas of liberty and free markets.” It is the hope of TFAS that these future leaders will continue to uphold the values essential to preserving the success of freedom and democracy throughout the world.

As part of the program, TFAS asked Editor-in-Chief of the Weekly Standard, Stephen F. Hayes, and Executive Director of HIF, Anna Smith Lacey, to speak about their experiences as alumni of TFAS programs. 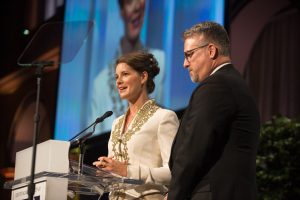 In her remarks, Anna Smith Lacey reiterated the pivotal role that TFAS played in preparing her and other peers for a career in fostering democracy, freedom, and human rights.

She described her experiences as a native of Hungary and the important role that TFAS plays in not only promoting American freedom, but the freedom of all nations. For her, TFAS is important in responding to factions who believe that democracy is not worthwhile.

When a significant chunk of millennials think, in America and around the world, that socialism is a better form of government than the free-market system; when they think that George W. Bush killed more people than Stalin, then we, NATO ally countries, have a problem as well. We have a problem, and America has a problem. But it is also a call for action. It is a call for action that TFAS has answered.

Anna Smith Lacey quoted the Governor of the first Hungarian Republic and true Hungarian patriot Kossuth Lajos, in lauding TFAS for its exceptional work and commitment to preserving America as the bastion of democracy and freedom for the world.

165 years ago, Lajos Kossuth came to America and was hosted by members of Congress. And he said to the Americans that “By the glorious example of your freedom, your welfare, and your security, mankind can become conscious of its own aims. The lesson you give to humanity will not be lost.” And this is the lesson that TFAS teaches through program, after program, after program to foreigners around the world, because the cause of America, to a great measure, is the cause of all mankind. And I truly believe in that. American exceptionalism is not against any other nation, it is for every other nation’s freedom.

In 2017 HIF has decided to partner with TFAS to sponsor the participation of Hungarian students in TFAS’s Washington DC Summer programs focusing on economics and public policy.