The Consulate General of Hungary in Chicago hosted a Regional Diaspora Meeting in Cleveland, OH on October 14. The weekend was complete with celebrations of the 500th anniversary of the Reformation and the 125th anniversary of America’s oldest Roman Catholic Church, Saint Elizabeth’s on Buckeye Road, in Cleveland. 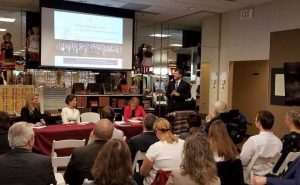 Over two dozen Hungarian American organizations were present at the Regional Diaspora Meeting in Cleveland, OH

In her welcoming remarks, Consul General Zita Bencsik underscored the importance of a pro-active, two-way engagement between the Hungarian American organizations and Hungary’s official representation in Chicago.

The open forum held at the Cleveland Hungarian Heritage Museum, which received several important upgrades through HIF grants,  aimed at better understanding the needs of the Hungarian America community and to review the general dynamic of the diaspora’s growth. Representatives came from all across northeast Ohio and from neighboring states as well to share their ongoing projects and future plans.

Dr. Szilágyi presented the Hungarian government’s various outreach programs, including the Mikes Kelemen Program, theKőrösi Csoma Sándor Program, the Julianus Program, the annual Diaspora Council and the grant opportunities offered by the Bethlen Gábor Fund all aimed at supporting the preservation of Hungarian cultural heritage abroad and fostering stronger relations between Hungary and the Hungarian American community, the largest Hungarian community outside of the United States. 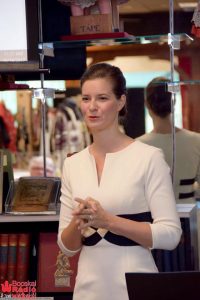 HIF Executive Director Anna Smith Lacey discussed the wide-ranging grant and funding opportunities that HIF offered in the past and will continue to do in the future, including sponsoring flagship Hungarian cultural programs, supporting grassroots educational programs in the Hungarian American community, fellowship and scholarship opportunities for young Hungarians and capacity-building events for diaspora representatives. She also emphasized that HIF will continue to prioritize projects that foster cooperation between various organizations, that are focused on youth outreach and education, that target non-Hungarian audiences, and that involve larger non-Hungarian educational and cultural institutions and organizations as project partners and those that have a long term vision and growth potential.

At the event, Andrea Mészárosné was honored with the Knight’s Cross of the Order of Merit of Hungary for her tireless work in preserving and promoting Hungarian culture in Cleveland.

The meetings were followed by celebrations at the Hungarian Baptist community, at the local Hungarian Reformed Church and a celebratory Mass as Cleveland’s Oldest Catholic Church, Saint Elizabeth’s.