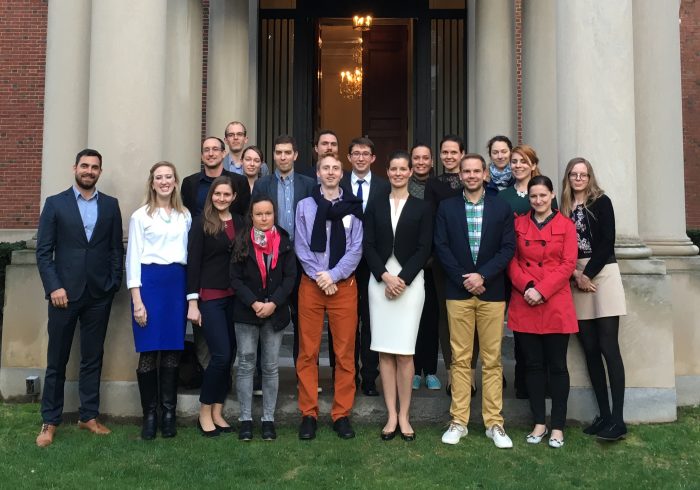 The Program offered young Hungarian leaders (graduate students and young professionals) a 5 day intense program in Washington DC. The program focused on a better understanding of the Founder’s idea of the role of government in American society, the first principles guiding America’s U.S. federal system of government and the various elements impacting US public policy today.

Through a mixture of briefings, readings, study sessions, workshops, and meetings with think-tanks, U.S. government representatives, as well as site visits, participants deepened their knowledge of the history and evolution of the American constitutional order, and a representative government necessary for a free and prosperous society.

I understood that I need to exchange my European eyeglasses for an American one in order to avoid the projections and misinterpretations about social and political issues in the US. The best way to do so if I understand the origin of the United States and explore the wisdom of the Founders which is still pulsating in the veins of American politicians and self-conscious citizens. – Viktor 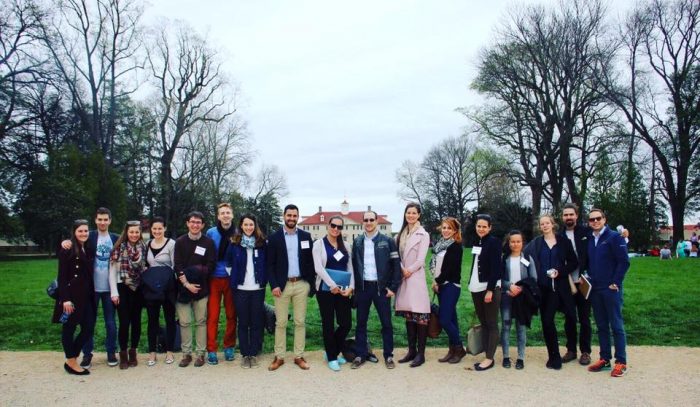 After a comprehensive tour of Washington, DC focusing on the architectural representations of separation of powers in the federal city, the program kicked off at the George Washington Leadership Institute at Mount Vernon where participants learned about the classical virtues (self-reflection, balance and perspective, true self-confidence and genuine humility) of America’s first president, who was “first in war, first in peace and first in the hearts of his countrymen”. Participants also enjoyed a special tour of Washington’s Mansion and the estate, which provided a practical understanding of the Founder’s era.

The most important thing I learned is the power of taking initiative. This is from the example of many speakers, participants, or persons discussed such as George Washington. – Máté 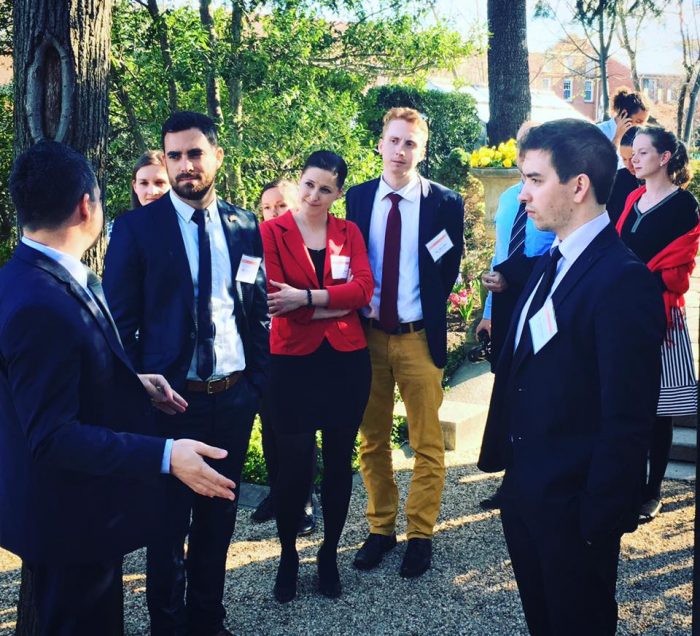 Dr. Juliana Geran Pilon talked later to the participants about the challenges of American public diplomacy and the sensitive balance between engagement in excessive foreign interventions and promoting America’s values abroad. The splendid Meridian House, an architectural jewel in Washington surrounded by beautiful historic gardens, was the venue of the day long discussions elevating both mind and spirit.

The last three days included an intense schedule of site visits and briefings including in the U.S. House of Representatives, the U.S. Capitol, the Supreme Court and the State Department.

I know way more about American Democracy than I did before this program, which makes me even more confident that there plenty of aspects to be implemented in the Hungarian minds and hearts. – László

The think tank visits focused on understanding how independent civil society organizations shape the American policy making process. Dr. Roger Pilon hosted the group at the Cato Institute and focused on the role of the federal courts, Ambassador Kurt Volker at the McCain Institute explained how an innovative approach to think tanks can turn them into effective problem-solvers as do-tanks, Dr. Lee Edwards at the Heritage Foundation explained the evolution of one of America’s oldest think tanks in Washington, Marion Smith, Joshua Dill and Ashlee Moody at the Victims of Communism Memorial Foundation focused on America’s anti-communist foreign policy tradition and human rights advocacy in Washington and on campuses today. 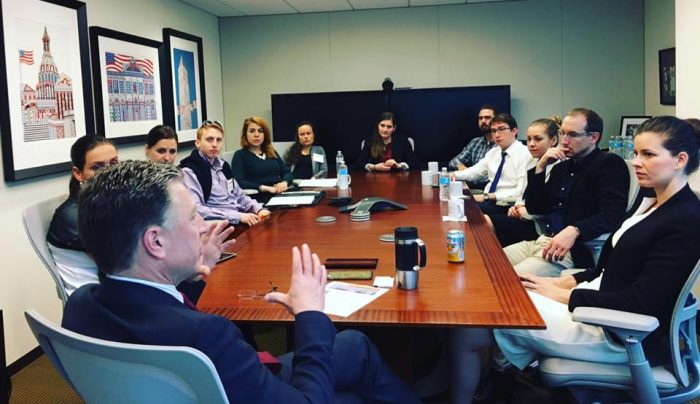 Kevin Klose, former director of Radio Free Europe/Radio Liberty talked about the responsibility of both citizens and journalists to distinguish between fake news and real news and finally, Ambassador András Simonyi, and former Deputy Assistant Secretary Debra Cagan hosted the Center for Transatlantic Relations at the Paul H. Nitze School of Advanced International Studies (SAIS), Johns Hopkins University for an in-depth discussion on the role of Central Europe in a changing world. Nancy Bocskor, an internationally renowned expert in fundraising and applied democracy coach also provided a practical guide to fundraising for a cause.

Besides the great amount of information, I acquired the „(can) do spirit” of the Americans. The entire week was full of inspiration, one could hardly wait to step in action and do something him/herself. – Györgyi

The program concluded with short briefing and overview of US-Hungary relations by Ambassador Réka Szemerkényi and Embassy staff (Péter Rada and Péter Gyombolai) as well as an uplifting tour of the splendid new Hungarian Embassy building.

Special thanks to Bogdan Banu and Kirsi Jarvis at Meridian for their hard work in making the first YHLP an enjoyable and substantive experience for everyone involved.

Read what they thought about the program:

The most important thing I learned during the entire program is that democracy can be real. – Adorján Benkő

By reading the articles, listening to the lectures and walking among the historical buildings, I acquired a deeper understanding of the American psyche to a great extent. Throughout the week, I felt that the program was carefully compiled by the organizers in order to provide an overall picture of the American way of thinking, and the main principles and virtues that makes a successful and generous nation.
– Viktor Pólya

Thanks to this program I realized that I totally misinterpreted the USA, the culture, and the people. Even though I have been living in this country for seven months, I think that I started to understand America just now. I have a feeling that I need to discover this country as much as I can before I leave!
– Noémi Szabó

I have exceptionally profited from the program by gaining insights into important and esteemed institutions, meeting and asking their representatives that has really brought US politics into life.
– Máté Mátyás

I was so impressed with the American system and leadership. I learned the essential lesson that being proud and building a nation up from the life of a nation’s heroes is really important. – Csenge Gonda

Gaining a deeper insight into the mechanism of the political and judiciary systems, and getting a bit familiar with the American mindset really helped me to understand critical decisions the country makes. – Gergő Mojzes

The very well-structured program built up a new understanding of America in my mind from step to step. I was very pleased to receive different perspectives from the speakers. It opened my eyes on many subjects. – Eszter Völner

Thanks to this program, I got a fuller understanding of American politics. Americans look at the world (including Hungary and Hungarian politics) from a different viewpoint and this program showed the world through the eyes of the American leadership. We also got a picture of the way they see themselves and their own system. – Márton György

I liked that it was diverse, highly interesting and well-organized. The most important for me was that I could better understand the federal system of government, but in general the program had a huge impact on me. – Rita Jakab

It was good to see fellow proud Hungarians sharing similar mindset with clear eyes and full heart; I hope that we are the new era of a open-minded Hungarian professionals, who stand up and make things happen. – László Dinca

It is unbelievable for me that a system based on seemingly idealistic thoughts – such as the total personal liberty or a government with limited power – could become the world’s leading democracy, functioning in a way never seen before. Realizing that this system had not changed much in the last 200 years convinced me of its strength and justness. I can see now that today’s Americans still think the same way as their ancestors did. – Györgyi Facskó

YHLP 2017 participants at the US Capitol

What can the John Reed incident teach us about leadership?

At the Kossuth statue in the US Capitol

What made America great? History tells – YHLP US Capitol tour

YHLP 2017 participants with Dr. Pilon at the Cato Institute

YHLP 2017 participants at the State Department after their briefing

YHLP 2017 participants at the Meridian House

YHLP 2017 participants at the Victims of Communism Memorial Foundation

YHLP 2017 participants at the Heritage Foundation with Dr Lee Edwards

YHLP 2017 participants with Nancy Bocskor after their fundraising workshop

YHLP 2017 participants visit of the Hungarian Chapel in DC

YHLP 2017 participants at the Hungarian Embassy with Amb. Réka Szemerkényi