With the support from the HIF Conference Support Scholarship, Mr. Gábor Tóth, predoctoral fellow at the Department of Biophysics and Cell Biology, University of Debrecen presented at the Frontiers in Cancer Immunotherapy Conference in New York, New York. 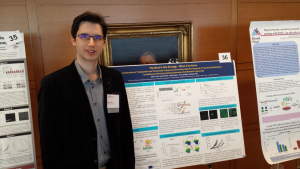 Mr. Toth at the Frontiers in Cancer Immunotherapy conference in New York

The Frontiers in Cancer Immunotherapy conference brings together researchers active in the field of cancer immunotherapy in company with industry representatives and government stakeholders, to delve into newfound research, clinical studies, and other related findings in order to enhance immunotherapeutic approaches in cancer treatment.

“There is an even greater dominance of USA-based laboratories in these therapeutic approaches and research than in other medical researches, especially compared to Hungary, where our research group is the only one so far working with genetically modified immune cells against cancer cells. As such, it is of great importance to study, communicate and keep in touch with other scientists of the fields.”

Mr. Tóth presented his paper titled: The Best Is Not Enough – When It Is Alone: The Combination of Trastuzumab and Pertuzumab Administered At Approved Doses May Delay Development of Trastuzumab Resistance by Additively Enhancing Antibody-Dependent Cell-Mediated Cytotoxicity. Mr. Tóth’s primary focus is on immunotherapeutic approaches to malignant diseases, and as a result of attending the conference, he was able to connect with other scientists of this field.

Mr. Tóth plans to continue with his research at the University of Debrecen in active immunotherapy of malignant diseases with the knowledge that he gained at the conference, which will aid not only his current research, but also help explain the current worldwide trends that will help in planning future project lines.

“We are devoted to bringing these therapies home for the Hungarian patients and to be able to do that, we need to learn the experiences of our colleges in the USA and worldwide.”