The Cleveland Hungarian Scout Folk Ensemble has successfully completed its ethnographic tour of Hungary and the regions of Serbia and Romania known respectively as Délvidék and Erdély this past summer. The Ensemble is comprised of greater Cleveland’s finest Hungarian boy- and girl-scout leaders dedicated to the research, study, and preservation of ethnic Hungarians’ rich folk traditions. It is in keeping with these ideals that the Ensemble traveled to the birthplace of Hungarian folk customs to be able to then share them with the larger Hungarian American community. HIF supported the group’s research trip through a cultural and educational grant which covered about one third of the costs of the program. 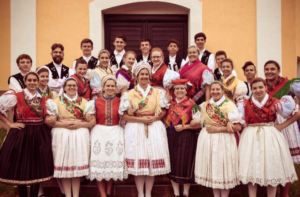 Members of the Ensemble in full costume.

While the tour certainly provided the Ensemble with opportunities to dance (which is its passion), the focus of the trip was to gather ever more authentic traditional folk material to incorporate into its repertoire for future performances. These goals ensure the continuation of the Ensemble for future generations of Cleveland’s Hungarian youth. This group represents the future of Hungarian culture in the Cleveland area.

Twenty-seven members of the Ensemble, which included twenty fifteen to twenty year-olds, and seven adult leaders and chaperones, completed the tour. The members spent ten days in Hungary, and eleven days in ethnic Hungarian regions of Serbia and Romania. While there, they lived in the villages and learned songs and skills, heard stories from the villagers themselves, and conducted ethnographic research.

The young Ensemble members returned with folk treasures in their suitcases, new folk dances and traditions in their repertoire, a host of new friends and acquaintances, and a love of their ancestral homeland in their hearts.

This trip clearly embodied the mission statement of our Ensemble, which also mirrors a portion of HIF’s own mission statement, specifically the desire to seek out, conserve, and teach the folk arts of ethnic Hungarians, and then to share them with our wider community. -Beatrice Tabor, President, American Hungarian Friends of Scouting

← Prev: New Website Celebrates the Success of 56er Hungarians in America Next: The Courage for Freedom: Texas 56ers Remember the Revolution →