Franciska Cunningham-Epli has just joined the Hungary Foundation as Grants Manager in October, 2017.  In this capacity, she will serve as primary point of contact for all HIF grantees, and will coordinate the pre-award and post-award processes associated with HIF’s diverse grant portfolio. 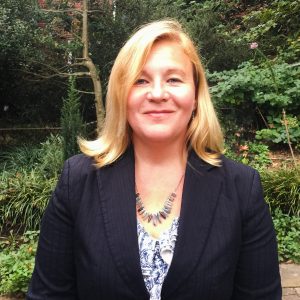 Being from a Hungarian minority in Romania, from Transylvania, and having lived on both sides of the Atlantic, Franciska has deep ties to Central and Eastern Europe and to the United States and understands the importance of strengthening the relationship and cultural connection between the two regions.

Franciska is from Alesd (Elesd), a small town near Oradea (Nagyvarad) and spent her youth in Transylvania. She graduated from the University of Oradea with a double major in English and French Literature and Language. After graduation Franciska taught English and French at the elementary school in her hometown. Later she relocated first to Budapest, Hungary and then to the United States with her family and has been living in the Washington DC area. She has taught English as a Foreign Language and English for Speakers of Other Languages in Romania, Budapest, and the Washington DC area.

Most recently she worked as an Evaluation Specialist for The International Research and Exchanges Board (IREX), in Bucharest, Romania, where she was part of the Bill and Melinda Gates Foundation funded Biblionet program, as part of the Global Libraries Initiative. The initiative helps transform public libraries into resource centers for everyone by providing free access to computers and the Internet, as well as training on how to make full use of these tools.

Franciska is bilingual, she speaks Hungarian and English fluently, she is proficient in Romanian and French and she also speaks Italian and Spanish at a beginner level.

“As a proud Hungarian American, I am deeply honored to join the Hungary Foundation and to support the deeper understanding of the broad impact Hungarian culture continues to have here in the United States. I am also looking forward to collaborating with the Hungarian communities in the US and Hungary in order to highlight the many cultural and educational links between Hungarians and Americans.”

Franciska can be reached at hf@hungaryfoundation.org