The weeks of warm March weather abruptly ended, and in April the jacket that I hoped was retired had to been summoned again. Seasons are a tricky thing that I still don’t understand thanks to the state of California.

There were elections that did not surprise, construction that was completed (just before elections, also not a surprise) and apparently Jude Law was in town making waves. Otherwise, business as usual from my vantage point.

I will mention a fairly new burger place called Magic Burger, not easy to get to without a car but worth taking the Yellow 19/49 to the end of the line in Buda, transferring to the 103 bus for a few stops and walking 10 minutes but it’s worth it. Or if you have a car, even better.

And onto my recent excusrions.

After more than a decade of empty promises, delays and escalating costs – certainly not uncommon features of a major public works undertaking in a major city – Budapest finally opened the doors to its shiny new Metro line 4 on March 28th, 2014. I was not living here over the past ten years, but listening to people that were and reading about its development one can get a sense as to the frustration felt by the city. Mayor Gabor Demszky, who reigned from 1990-2010, first announced in 1998 that a section would be open by 2003. Then in 2004, with the metro still unopened, he announced a delay until 2008. Then in April 2007, it was pushed back to 2010. And in September 2007 to 2011. In 2009, the project manager said it would be 2012. Finally, a year later, he said it would likely be 2015. You get the picture. It was by all accounts a very expensive undertaking, after all it is the first such line to pass under the Danube.

On a personal note, living in Buda and essentially tracing its path above ground for three stops to work every day on the Yellow 49, it did not seem necessary with plenty of buses and trams that move people closely along its route. Well there were plenty, now the above ground options are not quite as convenient since the city subsequently reduced their frequency upon its opening. That has been noticeable. The stations themselves are impressive and large, and the sleek cars give the city an undeniable modern upgrade. It is quite a contrast from the loud, grinding Soviet era cars of M2 and M3 and of course from the legendary M1, the oldest metro line in continental Europe which opened in 1896 is now a World heritage Site – which each have their own charm.

Pecs, which was the European capital of culture in 2010, was a pleasant weekend reprieve from the bright lights of Budapest just three hours south by train. After arriving I walked from the train station to Szechenyi Square, the historic center where my hotel was located, in some 20 minutes. The square which dates back to the Middle Ages is adorned by a contemporary giant horse sculpture, the Mosque of Pasha Qasim dating back to the Turks in the 17th century, and a lovely McDonalds that inhabits the busiest corner. 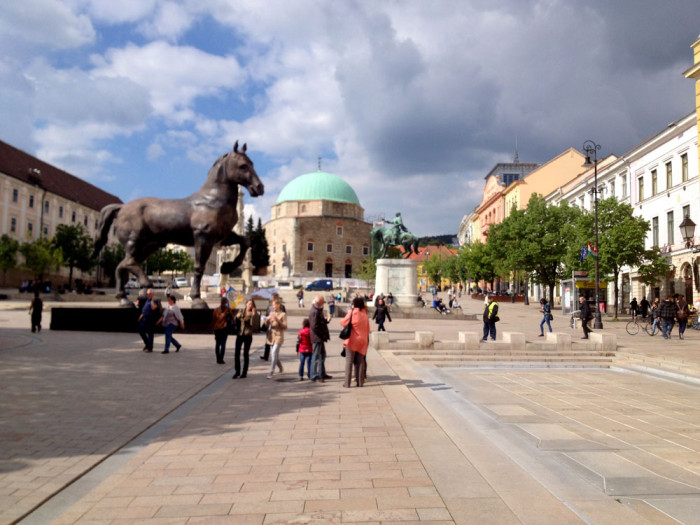 The city has many historical layers, the first of which can be seen in the underground Cella Septichora where you can wander amongst the late Roman burial chambers dating back to the 4th century. There are also some wonderful museums, my favorite of which was the Vasarely Muzeum exhibiting geometrical art that plays with field of depth and colors to make your head spin. Then there are the ceramics of the Zsolnay Cultural Quarter which were really extraordinary. The factory was founded in 1853, and you can follow the history of the family’s innovative ceramic glazing techniques that became world renown in the late 19th and early 20th century in the permanent exhibit. There is even a mausoleum just outside the quarter stretching up a softly sloping hillside flanked by 42 lions, the resting place of the Zsolnay family. It was my third mausoleum experience following Chairman Mao and Ho Chi Minh, and as you can imagine there wasn’t a line. The Gyugi Collection is the pinnacle of the quarter, an absolutely stunning exhibit of the periods of Historicism and Art Nouveau. It is hard to believe that these ceramics are more than 100 years old, I have never seen anything like it.

There were not a lot of tourists this particular April weekend, and I found myself alone in some of the museums – even the Septichora – which really allows you to take a deep breath and absorb what you are seeing. And to top off the weekend, the Pecs Tisza shop was having a 50% off sale. Good times.

Located just off the banks of the Danube outside the ring in Pest, the Zwazk family Unicum distillery is Hungarian landmark that has been in operation for well over 100 years, enduring the tumultuous times of the 20th century and continuing to produce Hungary’s national drink both for domestic and international consumers. 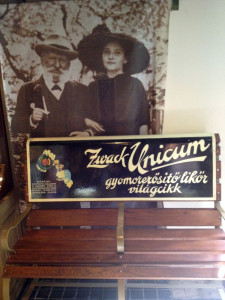 The story is truly amazing, as depicted in a 20 minute introductory video and complimented by the museum exhibiting historical mementos chronologically organized with available audio tour. After WWII, the company was nationalized and the Communist regime demanded the original family recipe for production. Janos Zwack and his son Peter fled to the United States with the recipe, while Bela Zwack stayed behind and provided a fake recipe. Once in the U.S., Janos filed and won a lawsuit against the Hungarian government for illegal use of the Zwack trademark and subsequently the Communist version of the product was banned from export to the West. It wasn’t until Peter returned and purchased the company in 1989 that the original Zwack product was reintroduced.

The 1800 HUF ticket includes a sampler of the original Unicium, the plum Unicum, and the famous Futyulos apricot palinka, and the shop has a great selection of Zwack products to purchase before you leave. If you are going alone or in a small group, make sure to call or email in advance for their weekly hours of operation which change depending on arranged tours for large groups.