A great deal of superb programs in Budapest

A few weeks ago I took the blue mini-bus up to Castle Hill to have a look at the National Gallery which has inhabited Buda Castle since 1973. I found the upstairs 20th century art collection to be particularly fascinating given the political realities of the time – expression under totalitarianism. In the 1950’s ideological and stylistic requirements were prescribed by the dictatorial one-party system’s cultural policy. This ‘socialist realism’ included works that glorified the champion worker or ‘stakhanovite’ within the fabric of utopian society. At the same time, non-conforming avant-garde artists went underground into personal exile. One such artist was Lajos Kassák, whose pre-war works influenced by Constructivism were banned in the 1950s. The 1957 decree that emerged from the Hungarian Socialist Workers Party conference was as follows:

“We must pursue a carefully planned, high level ideological fight against the bourgeois and counter-revolutionary tendencies and the ideological chaos that are still very markedly present in the ideological sphere. In the fields of art, we must primarily support Socialist-Realist works, which are in line with our ideology. We must foster the progress of our art and literature towards Socialist Realism. We must also leave space for other progressive trends, obviously, reserving the right to criticize them.”

This last sentence led to the dawn of the cultural opening, and the division of art into three categories, ‘supportive, tolerated, and forbidden.’ Eventually parallel art emerged that broke away from social realism in the 60s and 70s, and experimental works of the Hungarian post-war avant-garde generation were inspired by new abstract and figurative trends in Europe. I am not an art critic or connoisseur by any means, but I like history. The information displayed in each room explains the connection between art and the political realities of the time, so even if you don’t appreciate art per-se it is worth an hour-long afternoon visit.

I also had my first bowl of halászlé (fish soup), under the guidance of a Hungarian friend who had warned me that there are good and bad versions that veer to the extremes. We went to a nice little restaurant in Buda called Bodrogi, and the soup was great; it was thick and had a little kick to it, overall very satisfying. 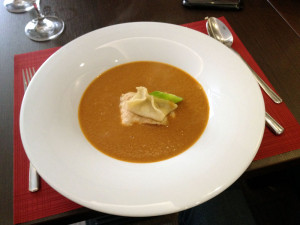 I am learning to appreciate how important Hungarian food is to Hungarians. Hungarian soups in particular are lamented by those living abroad, and I can see why because they are part of every meal and hearty (think goulash, meat and vegetables, with a lot of variations). Desserts are also difficult to replace. When we had remegős túrógombóc (a cream cheese dessert), my friend was sending photos to her Hungarian friend living in New York to her extreme delight. I imagine that these everyday Hungarian staples are simply not recreated in other parts of the world because there just aren’t that many Hungarian enclaves out there. 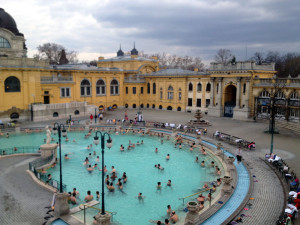 After lunch we went to Széchenyi thermal bath in City Park, the largest medicinal bath in Europe opened in 1913 and supplied by two large thermal springs. While entrance is not cheap (around 4700 forint) if you stay for a few hours and take advantage of all of the facilities you don’t feel completely ripped off. Sunday afternoon is probably when it is most crowded – and on this particular Sunday full of tourists – but it is an expansive indoor/outdoor structure and there is ample room for everyone to rotate in and out of saunas and baths more or less at your leisure. If you want to swim in the lap pool, don’t forget to bring a cap.

One of the first spring feeling days of the year, it was great to be out along the water. The building itself is kind of a faux pas among the locals, an admittedly odd blending of new and old architecture (not to mention the final price tag of renovations which draws most of the ire) but if you can grab a seat outside at one of the café restaurants lining the river bank, I cannot imagine a better place in the city to enjoy a coffee and some sunshine. Traditional food, beer, pálinka – all of the usual suspects were available for consumption outside the back of the building.
6th Budapest Architecture Film Days at Toldi Cinema. 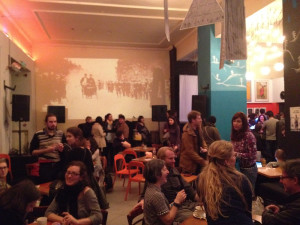 This was a four day event organized by the Hungarian Contemporary Architecture Centre (KEK) which featured international short film entries selected by the organizers. My first time at Toldi Cinema, the cafe was cozy and artsy and there was a palpable air of anticipation among attendees. I made it to the final screening on Sunday entitled ‘Away from all suns!’ and it was very entertaining (the contemporary battle to preserve remaining Constructivist buildings in Moscow). I would definitely recommend checking out the venue next year.

It was a strange day of ominous windy weather, but nonetheless I marched across Szabadság Híd (Liberty Bridge), eventually making my way to Parliament and up to Buda Castle. It seemed like most Hungarians were smartly bunkered down in their homes to avoid the swirling winds and eventual rainfall, while tourists took to the streets to snap photos and buy traditional food and craft on Castle Hill.

Free Jamison at Szabadság square, a nice bagpipe procession to Instant – all in all a great time despite very windy weather.