The Hungarian American Memorial Committee, spearheaded by Hungarian architect László Papp, was formed in 2006 to realize the dream of building a permanent memorial in New York City honoring the heroes of the 1956 Hungarian Revolution. The planned 1956 Memorial will be placed in Riverside Park, next to the Kossuth Statue, and is expected to be completed in Spring 2017.

Through the initial support of former Governor and HIF Board Member George E. Pataki, the Committee entered into a mutually beneficial private-public partnership with the various municipal authorities to realize the plans for the Memorial to the Heroes of the 1956 Hungarian Revolution in New York City.

The officially designated location of the 1956 Memorial is on the west side of Manhattan, in a beautiful section of Riverside Park, approximately between the scenic Hudson River and the historic Columbia University campus and near the Cathedral of Saint John the Divine. The area around and just south of the familiar Louis Kossuth statue at West 113th Street will be henceforth known as Kossuth Plaza. By partnering with the Riverside Commission the Committee is restoring this whole section of the park and thus also making room for the 1956 Memorial on it’s southern end, facing the existing statue. This has been a traditional gathering place for Hungarian-Americans since 1928, where the March 15th National Day remembrances are held every year. For casual visitors, our Memorial will be a reminder of a major historic event of the 20th Century and will serve as a symbol of gratitude from the many Hungarian-Americans who found refuge here!

The design of the future Memorial was the result of an open, international competition organized by the Committee. The selection was decided by an impartial, international jury of six art professionals from the U.S. and Canada, some of whom were born in Hungary. Due to extremely restrictive guidelines required by the various municipal authorities, the design possibilities were limited to only abstract, symbolic elements. The jury was unanimous in its choice of the design entered by Professor Tamás Nagy of Budapest, Hungary. 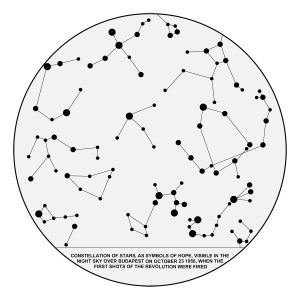 The future Memorial consists of two adjacent stone sections, one rectangular and one that is round. The rectangular section in part forms a seating structure facing the Kossuth Statue and is ideal for rest and quiet contemplation in the serenity of the location. Part of this element is also ideal for the placement of memorial candles and wreaths. An appropriate memorial text will be etched in the stone. The adjacent round stone structure supports the main decorative element, a constellation of stars made up of metal studs sunk into the stone, to represent stars. The constellation thus pictured is the same as the one that was visible in the night sky above Budapest on October 23rd, 1956. This poetic symbolism is representative of an emotional, ancient human custom of looking to the sky or the heavens for hope, inspiration and help. Clearly, this is a beautiful representation of the feelings and strivings of the Hungarian people at the time of their revolt against communist tyranny in 1956.

Tamás Nagy (born 1951, Csorna, Hungary) received his diploma in architecture in 1975 from the Technical University of Budapest. After working on commissions in Hungary, he spent 3 years in New York City working in the offices of Haines Lundberg Waehler Architects (1986-89). Upon his return to Budapest, he worked for a year in the design studio of the renowned Hungarian architect Imre Makovecz. In 1990, with two partners, established the AXIS Architectural firm, where he worked for 10 years. In 2000, he started his own firm, the LINT Architecture & Design Studio, where he is still the chief architect. He has been teaching at various institutions since 1979 and since 2004. He is the director of the Architecture Department of Moholy Nagy University in Budapest. Tamás Nagy is the recipient of numerous professional awards including the prestigious Ybl Prize.