1848 and 1776: Reminders from Hungarian and American Desires for Independence 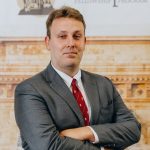 As the world watches Ukraine’s heart-wrenching struggle for independence, the region’s history offers important lessons to keep in mind. Not all independence movements are successful, many tragically littering the history of mankind. Nor are all independence movements noble, as no people has the monopoly on goodness and righteousness, on evil and debauchery. Yet there are two peoples, the Americans and the Hungarians, who strove for some of that nobility and righteousness, and thus can be examples for those striving for the same in the present.

Though the American and Hungarian peoples are separated by thousands of miles and a vast ocean, they both share a common bond, past and present, of desiring freedom, liberty and a constitutional system to govern their own affairs. Both were and are to this day, enlivened first by the principled stands of lower aristocracy in their peoples’ histories. For the Americans, this was the Magna Carta of 1215, which began to limit the power of the king, and would give rise to the modern British Constitution. This eventually inspired America’s quest for a constitutional order based on laws, and not of men. In the Hungarian case, the Golden Bull, not too dissimilar from Magna Carta, was written in 1222, and in part inspired a relatively liberal Hungary to take shape for centuries. Outside of Britain and perhaps Poland, this was almost unheard of in Europe until the 19th century, no minor feat in European political history.

For the story of their respective paths to independence however, the American and Hungarian peoples didn’t share the same timeline. The former was somewhat immune from the ravages of geopolitics and stark reality of geography. Though originally a frontier country, and thousands of miles away from the heart of empire, America at first prospered and thrived from benign neglect. Not originally its own nation, America had the protection of mother Britain, as well as the passed down customs and traditions of British inheritance. When the political grip of the mother country became too much however, these cantankerous Americans vociferously expressed displeasure. Or as the wise Anglo-Irish statesman Edmund Burke basically put it, these colonists, especially those in the northern colonies, were ‘the most dissident dissenters, the most Protestant Protestants.’ Not dismayed they faced the greatest empire to ever stretch the globe, American patriots rose up against the British authority, and ironically on largely British principles, formed a new nation, far from the conniving and domineering powers in Europe. 1776 was the true declaration of their independence, making America a separate, and future power. 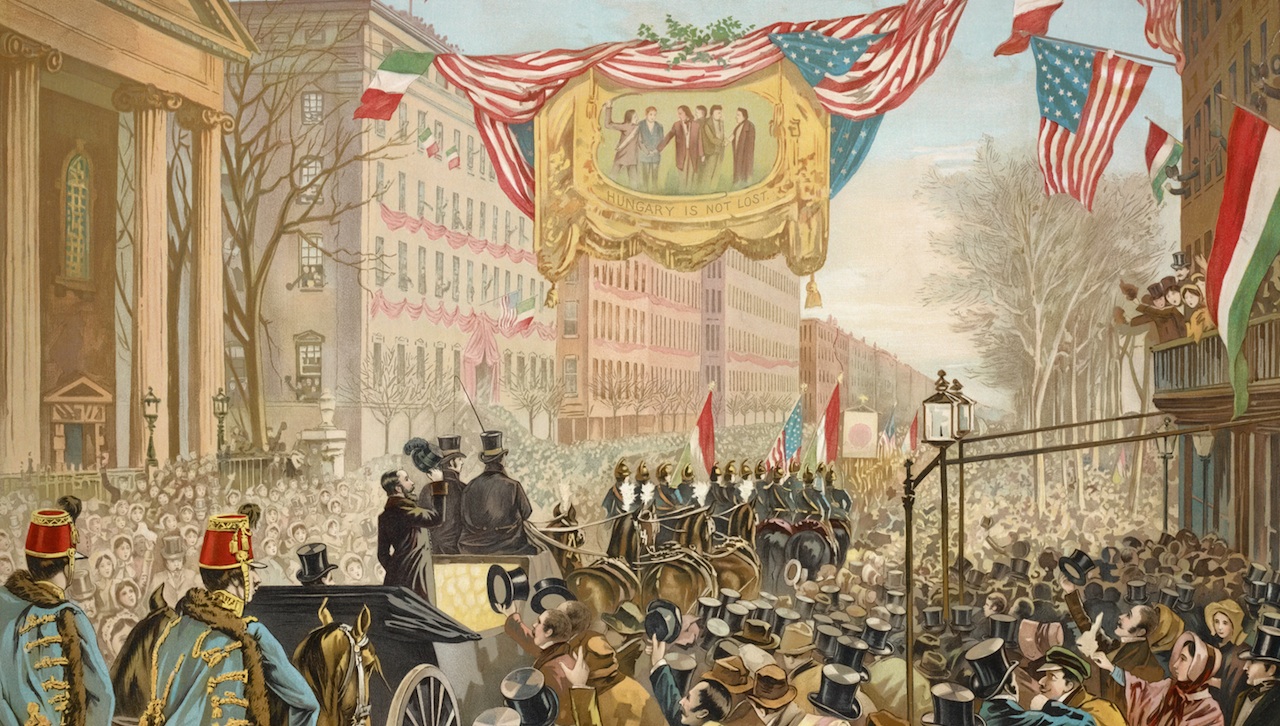 Kossuth received by huge crowds on Broadway in 1852

Hungarians in the beginning of their kingdom in Central Europe, started with independence. Although still in the medieval period, long before liberal governance and free markets were in vogue, the 9th through the early part of the 16thcentury saw periods of prosperity and advancement for the Magyars. Unfortunately, this independence was to be lost for centuries. With the marauding Ottomans invading, having just slain the remnants of the Eastern Roman Empire decades before, finally took much of historical Hungary, only leaving two sections: one was under Austrian rule in the West, and a quasi-independent country in today’s Transylvania. After more than a century of devastation, pillaging and cultural destruction, old Hungary was restored, but their now long-lost independence was not restored as the Ottomans withdrew.

Under Habsburg deprivations, Hungarian luminaries such as Kossuth, Széchenyi and others, clamored for more and more autonomy for their fellow Magyars in the 19th century. Much inspired by the American Founding Fathers, the Hungarian reformers captured an old Anglo-American spirit, desiring a country that should govern its own affairs. Sadly, that mid-19th century independent fervor which swept across much of Europe, was either too much in line with the proto-socialists, or was just plainly stamped out by the other extreme force of reaction. Hungary, more driven by classical liberal principles, would soon face the cruelty of the latter. Though the Magyars fought bravely against their Habsburg masters, Russia, ever the ultimate aggressor to threaten or actually demolish freedom in Europe, was called upon. Facing overwhelming odds, Hungary was put back under Habsburg rule, when resistance ultimately proved futile.

When the revolution floundered in 1849, the road was much harder for the Magyars on the road to eventual independence, than it was for America. Not bound to the traditional European reality of geopolitics and the tragedy of an unforgiving geographic location surrounded by strong neighbors, America was able to grow apart from the relative chaos. This fortunately included forming away from the din of cannon and riflery which rocked European countries throughout much of the 19th century, whether these were the grand Napoleonic Wars, or the internal wars of German and Italian unification. Save a massive internal civil war, which was traumatic and altered the nation forever, Americans were blessed. Two oceans, relatively weak neighbors, massive resources ready to exploit and a usually thriving economy to soak up the massive influx of immigrants and high birthrate of native and foreigner alike, America was in a most advantageous situation.

Hungary was not so fortunate. After brutality from the Habsburg monarchy, some autonomy was gained for the last few decades of the 19th century. While not what many in 1848 had wanted or intended, their sacrifice was perhaps not totally in vain. When Hungary finally gained independence after the dissolution of the Habsburgs and the end of WWI, a most bitter cup was offered to her. She lost much of her territory, most of her resources and a large portion of her population, a heavy price for independence. Once more, the tragedy of geography pitted her in the machinations of Nazi Germany, which was almost a given, as the Soviet Union was as bad or worse of an option. Again, independence was lost for decades as WWII concluded, Hungary being on both the wrong side in geopolitics and on the wrong side of Europe, as the Iron Curtain divided Europe. Thankfully, communism proved a poor taskmaster, irritating the peoples of Central and Eastern Europe, unable to properly feed the people, economically, culturally or spiritually. Aided by American action and support, the fall of the Berlin Wall in 1989 and the collapse of the USSR, Hungary finally could breathe free once more, fulfilling at least in part, the promise of 1848 with the democratic regime change of 1989-1990.

Though the stories of both countries diverge in many places, when looking at the things that really matter to countries and nations, both America and Hungary never quit.

Liberty, freedom, competitive markets, self-governance, and many other qualities that define free peoples, was never far from the thoughts of American and Magyar. It is forgotten that America, still an adolescent country, was inspired by the Hungarians of 1848, and gladly embraced the revolutionary leader Kossuth during his American tour after the fall of Hungarian revolt. It is less likely forgotten, that Hungarians, as well as other Europeans forced in the position of slavish vassals to Soviet totalitarianism, were inspired by the American story and the hard-fought battles by Americans to maintain that storied freedom and liberty.

With the current struggle facing us today, Russia again playing the crushing hammer to those who wish for independence, in this case, the Ukrainian people (not necessarily the Ukrainian government), both Americans and Hungarians should remind themselves of a couple of things. First, despite any differences they may have shared, all the revolutionaries from both countries wanted many of the same things: autonomy, recognition as some form of a separate power, a distinct cultural identity and the like. These higher goals should raise to the top, with any sense of rivalry or feud being placed in secondary importance to the common goal. With Ukraine today, despite their delving into American politics, and the crass treatment of Hungarian minorities near the border of Hungary, these grievances must be laid aside for now. Instead, all in the West should be cheering on the Ukrainians in their noble struggle against Russian aggression.

Secondly, and perhaps more importantly, as we commemorate the anniversary of the Hungarian War of independence of March 15th 1848, all those in America and Hungary should be grateful that they live in independent and still relatively free countries. Sometimes it is easy to lose sight of this, especially since the immense sacrifices of our ancestors seem so long ago. But those sacrifices that Americans made in 1776, and Hungarians in 1848, should not be relegated to the mists of time. Rather, they should be constantly brought up again and again to remind our peoples what they had, what they now have, and what they could potentially give up if they forget or grow complacent. While Hungarians had a much longer road to independence, and most of the time a much harsher one, both countries should not only celebrate their iconic and noble heroes of the past. They should also be thankful that those heroes set up their descending generations to live in nations that don’t face what Ukraine does now, or the freedom loving peoples in Russia or China experience today as well. Freedom, liberty and independence are not the usual human experience, with force, conformism and slavery being far more common in the tragic annals of history. It should never be forgotten, the dates of July 4th, 1776, and March 15th, 1848, are not the rule, but the exception. Americans and Hungarians must therefore embrace this exceptionalism, and be the well wishers of those who strive for this exclusive club of exceptionalism too.

Tate Sanders is a fellow in the Hungary Foundation and Mathias Corvinus Collegium’s Budapest Fellowship Program. He is hosted by the National University of Public Service in Budapest. His area of focus is transatlantic relations with Central and Eastern Europe, with a sub-focus on energy policy.