Last week Hungary Foundation organized its fourth Young Hungarian Leaders Program (YHLP) and invited 11 Hungarian participants to join the program. The program’s goal is to provide all Hungary Foundation’s program participants with the opportunity to better understand the Founders’ idea of the role of government in American society, the way the U.S. federal system of government is designed, and to appreciate the various elements impacting US public policy today.

Through a series of briefings, lectures, workshops, and meetings with think tanks, U.S. government representatives, as well as site visits, participants deepened their understanding of the history and evolution of the American constitutional order, and a representative government necessary for a free and prosperous society. 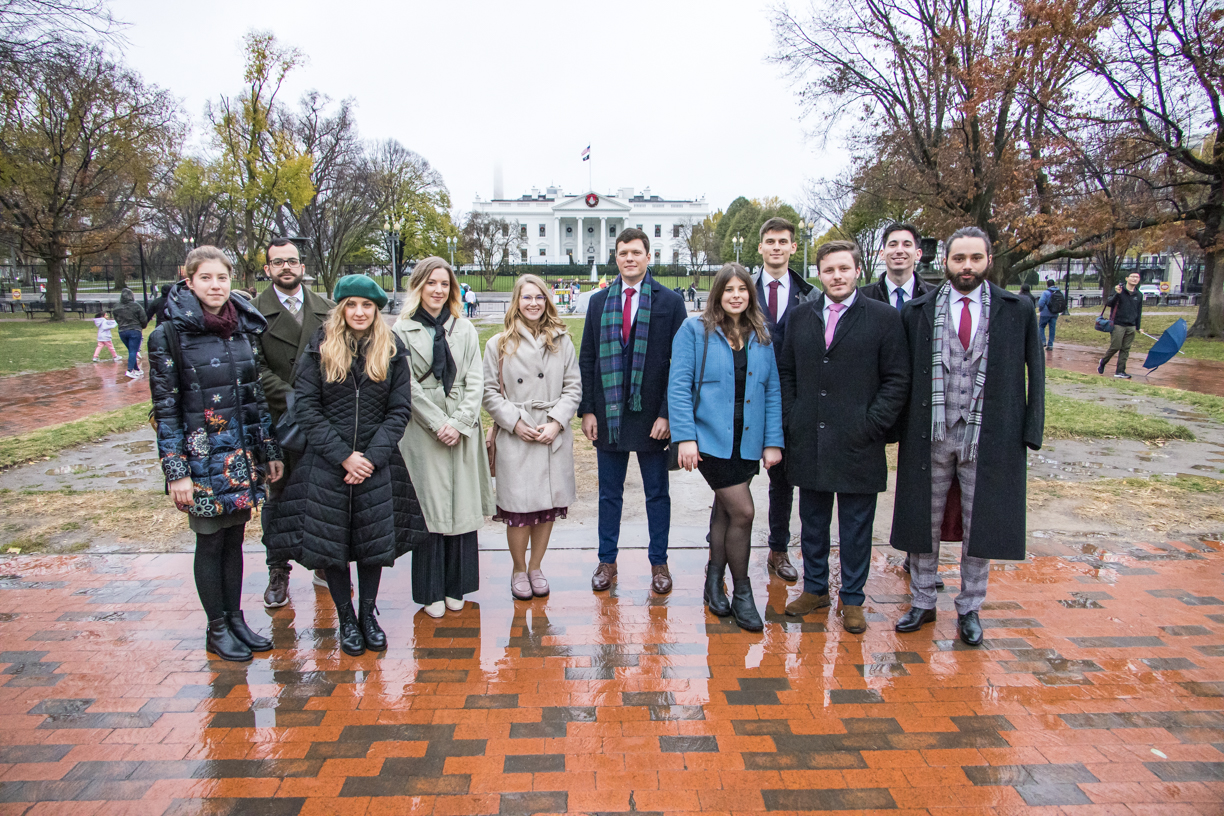 The 2022 Young Hungarian Leaders Program started with a historic tour of Washington DC, discovering the philosophical foundations that the city was built on. Exploring the Founders’ vision for the capital of America based in part on Greek and Roman philosophy, and the challenges to creating the seat of the government out of marshland. From the White House through various Memorials, and the overall history of the nation’s capital, the group was accompanied by Jeanne Fogle, Hungary Foundation’s amazing tour guide partner.

“It was a great experience to explore the founding ideas of Washington DC. Theory about the rule of law and separation of powers has been greatly translated into practicalities by visiting the institutions of representation democracy from the state department to the house of representatives.”  – YHLP Participant

“It was interesting to be placed at Mount Vernon and listen to how leadership skills can be developed over time. It has had a big impact on me that we need to be well-rounded individuals, not only good in our profession.” – YHLP Participant

Day 3 – Understanding Federalism and the Separation of Powers

The participants were offered a deeper understanding of the principles that guide US politics today, by attending lectures on Federalism and the Separation of Powers in the US with Dr. Roger Pilon; Why is America Such a Hard Sell with Dr. Juliana Geron Pilon; and the Traditions of American Political Thought with Alan Levine. The day ended with a visit to the Kossuth Foundation for a documentary screening of Created Equal: Clarence Thomas in His Own Words.

“It was an eye-opening and inspiring experience. The structure of the program was logical – starting with the basics and progressing towards particular institutions. It extended my knowledge about the American way of thinking, political philosophy and constitutional system.” – YHLP Participant

The fourth day focused on The Role of Media and Thinks Tanks Influencing Public Policy in Washington DC with site visits at Politico with a briefing by Daniel Lippman, investigative journalist; followed by a presentation of the State Department by Alan D. Meltzer and Jeremy Jewett. Later, the group visited the Embassy of Hungary and received a briefing on US-Hungary relations with Magor Ernyei, Deputy Chief of Mission at the Embassy of Hungary in Washington DC, as well as a presentation on the Hungarian American Diaspora with Zita Mirk, Diaspora Liaison. The participants also attended a presentation and panel discussion of the National Civic Art Society on “The Golden City” – An Argument for Classical Architecture.

“The program truly gave a comprehensive view of what Washington as an entity is really made of. We were taken through the historical cornerstones of the young nation’s history, but the fact that we could hear about the contemporary political actors, we received a full picture of the American processes taking place.” – YHLP Participant

Through a visit to the Supreme Court, as well as a series of briefings by the staffers at the House of Representatives and the U.S. Senate, the group received an insight into how the various branches of government work together or against each other in forming public policy. The YHLP participants were invited to Hungary Foundation’s Cultural Ambassador of the Year – Éva Polgár’s Evocation Piano Tour.

The week-long program ended with a seminar on free markets by Prof. Chris Ball of Quinnipiac University, followed by a British Parliamentary-style debate on whether military service should be mandatory as well as with The Pitch where the program participants presented an innovative project idea to further advance the Hungary-US relations.

“The program gave us a more profound knowledge of the US democracy and federal system which is essential to understand the country’s functioning. This week was quite intensive, I wish we could stay longer and immerse ourselves more into America.” – YHLP Participant

Watch the recap video of the week here: