The Atlantic Council in cooperation with GLOBSEC hosted a two day conference this week in Washington highlighting the importance of Central Europe as engines of the transatlantic relationship. HIF Chairman Ambassador April Foley, Board Member Ambassador Kurt Volker and Executive Director Anna Smith Lacey were featured in the robust program focusing on the past, present and future of the alliance.

The program started on July 16 with the launch of the Council’s Weiser Family Distinguished Fellowship awarded to Ambassador Dan Fried. During an off-the-record dinner that featuring Senator Susan Collins, Council leadership, diplomats from the region and fellow architects and stakeholders discussed the state of affairs of the US-Central Europe relationship. At the dinner Ambassador April Foley stressed the importance of going beyond the headlines and building up trust to truly understand the region’s country-specific issues.

The conference on July 17 celebrated these anniversaries while also galvanizing a community of leaders to strengthen these ties for the future. The Atlantic Council also launched a report on US-Central European relations co-authored by the Council and GLOBSEC.

Former US Ambassador to Hungary Colleen Bell lead an insightful conversation with Acting Assistant Secretary of State for European and Eurasian Affairs, US Department of State Ambassador Phil Reeker who discussed how, after years of disinterest and occasional disagreements, the US administration has re-engaged with its allies in Central Europe at a time when their help is critical in confronting a revisionist Russia and a resurgent China. Read a recap of the conversation here. 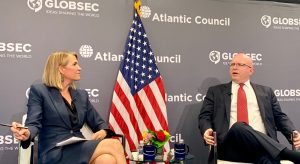 Anna Smith Lacey talked about why national identity and sovereignty is important for countries in Central Europe that suffered from communist oppression, and why a respect for traditions that region holds dear should be a key element of US-Central Europe relations. She also highlighted the wide support that NATO enjoys across the region and praised the U.S. administration’s new approach towards Central and Eastern Europe based on realism, restraint, and respect.

Anna Smith Lacey on What the West Stands For 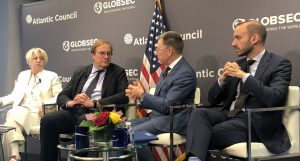 The conference ended with foreign ministers from the Visegrád countries the Czech Republic, Hungary, Poland, and Slovakia.  how Central Europe signaled that they are ready to take the lead in repairing the vital transatlantic relationship. Ministers Miroslav Lajčák (SK),  Jacek Czaputowicz (PL), Péter Szijjártó (HU) and Deputy Minister Aleš Chmelař (CZ) all celebrated the deep relationship their countries have with the United States and displayed the Visegrád version of E Pluribus Unum on transatlantic commitment. Read a recap of the discussion here. 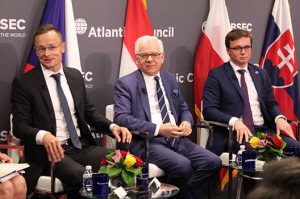