TFAS Conference on The Future of Liberty + Leadership

This year’s The Future of Liberty + Leadership Conference hosted by one of HIF’s partner institutions, The Fund for American Studies, was an opportunity to hear from alumni who are involved in educating for liberty around the globe. 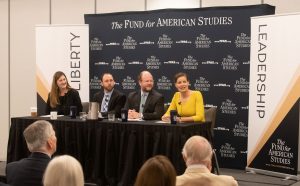 Anna Smith Lacey, a native of Hungary, spoke of the impact that TFAS programs have on their participants and how the programs shape their thinking on the role of government in a free society. She said that an important aspect of the programs is that while students get a total immersion experience in Washington, they are encouraged to interact and debate amongst themselves, even more so than in an American college class.

“Debates are important and necessary, but they have to be respectful, balanced, civilized, and well-structured.” – Anna Smith Lacey

Peter Feldman stressed that democracy cannot work without discourse. He believes that learning how to engage in substantive debate is at least as much about skills as it is about intellect.

The panel also discussed the impact of social media on students. Nick Ballasy considered the negative effect that social media buzzwords are having on site users, causing them to lose their critical thinking skills. He concluded that people need to look past everything they are seeing and being told on social media.

Anna Smith Lacey concluded the panel highlighting the importance of extracurricular and continuing education, something that TFAS provides on a regular basis for its alumni, which might prove to be as useful, if not more useful than expensive college degrees these days.

“American students who do not learn about first principles and the Founders are missing out on the biggest source of intellectual inspiration available for them. ”  – Anna Smith Lacey

Since 2018, HIF has been closely cooperating with TFAS and launched the Széll Kálmán Fellowship last Summer. The fellowship is a unique, fully-funded opportunity for Hungarians to participate in TFAS’s intense summer and fall programs to live, learn, and intern in Washington, DC.

Founded in 1967, The Fund for American Studies (TFAS) is an educational nonprofit that  has over 42,000 alumni around the globe and has worked with over 18,000 students to teach the principles of limited government, free-market economics and honorable leadership to students and young professionals in America and around the world.