Press Release: Ready, Steady, HuGo! Meet the App to Find All Things Hungarian in the US

HuGo started its journey across the US. Its mission: to find all things Hungarian in the US. 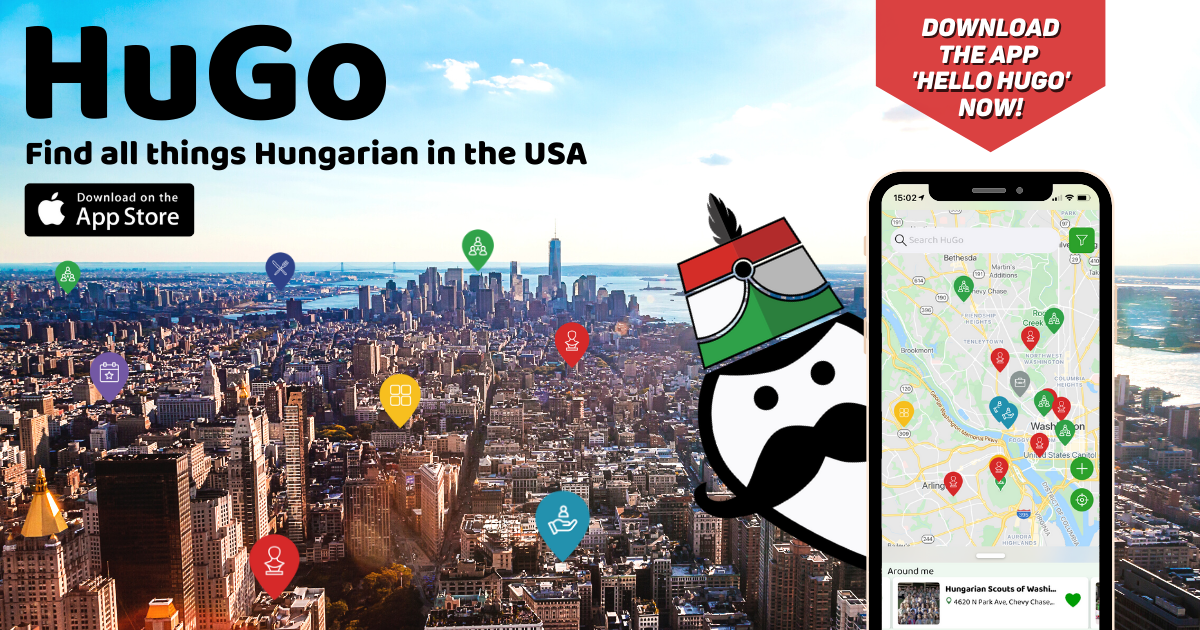 The new app launched by the Hungary Foundation aims to gather anything and everything in the US with Hungarian ties. HuGo, which already features hundreds of points of interest from historic sites to restaurants and services to community spots is a new platform for Hungarians, Americans, and Hungarian Americans alike. HuGo now available on iOS in the App Store and offers to fill a unique niche by providing a platform for anyone interested in all things Hungarian in the US.

The HuGo app lists Hungarian points of interest from the past as well as the present in categories such as history, food, community, services, official and events. HuGo’s avatar is an adventure-seeking modern hussar, who visits Hungarian sites in the US and shares them with everyone who follows along.

“Though it may only be known to few, a Hungarian Hussar named Mihály Kováts played a significant role in establishing the American cavalry in the South during the American Revolution. He gave the ultimate sacrifice and died in Charleston, South Carolina for the cause of freedom. He symbolizes the important role that Hungarians played in US history from its very beginnings, and this is why we chose the hussar character for the app” – said Anna Smith Lacey, Executive Director of the Hungary Foundation, the creator of the app.

The app’s concept was developed by the Washington DC-based Hungary Foundation, with the active involvement of Hungarian American organizations and American users interested in Hungary.

“We Hungarians have been contributing to the development of America for centuries, there is barely a place within the USA without a Hungarian footprint. That’s a story we would like to tell in a practical way through the app.” – said Anna Smith Lacey, head of the foundation.

HuGo already features hundreds of Hungarian sites within the US, ranging from a chimney cake maker in California to the stained glass windows of the Washington National Cathedral made by Ervin Bossányi. Other sites include the iconic New York St. Moritz Hotel and Ritz skyscrapers designed by Emery Roth (Imre Róth) or an authentic Hungarian farm in Pennsylvania, the “source” of Hungarian Dobos cake as well as numerous sculptures and plaques of Hungarian Freedom Fighter Lajos Kossuth.

The HuGo app is not merely an online map marking American locations with Hungarian relevance, but also a social media platform enabling users to continuously upload sites and locations they discover or know of.

“We think HuGo answers people’s innate desire to step out from isolation and connect with what surrounds them: whether it be involvement in a community event they didn’t know about before, a restaurant they didn’t even realize was just a few blocks away, or going on a trip to a historic site that has special Hungarian significance. HuGo aims to enrich the lives of its users no matter what their background by presenting the rich Hungarian-American tapestry in the US.” – Anna Smith Lacey.

To mark the launch of HuGo and collect as many Hungarian points of interest in the US as possible, the Hungary Foundation will offer a US-Hungary roundtrip ticket for anyone who registers and uploads the greatest number of new points of interest to the app by April 15. For more details, visit HuGo’s Facebook and Instagram page.

HuGo in  the iOS App Store