The Hungary Foundation (HIF) and Ludovika-University of Public Service (NKE) have concluded a Memorandum of Understanding in order to facilitate their educational and academic cooperation. 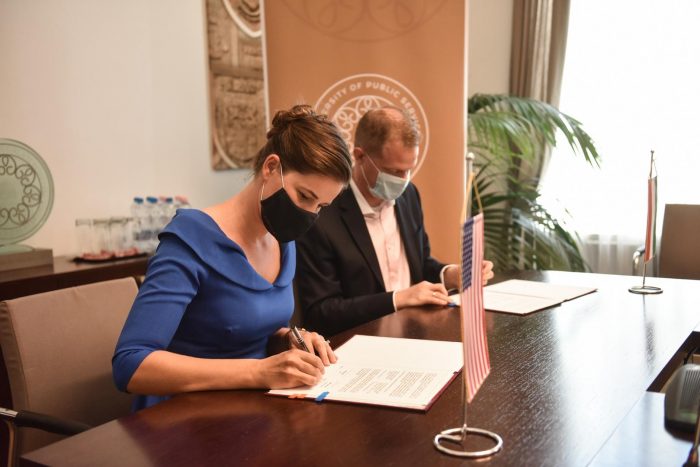 The Hungary Foundation (HIF) and Ludovika-University of Public Service have concluded a Memorandum of Understanding this week, in order to facilitate their educational and academic cooperation. 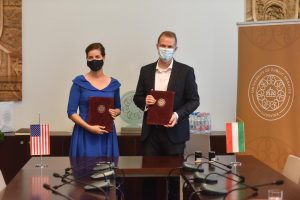 The most recent joint event of this cooperation was the thematic day of the orientation week of the Budapest Fellowship Program organized by HIF and Ludovika-UPS on the Ludovika Campus. This existing academic relationship has been extended and formalized by the Memorandum, signed by András Koltay, Rector of Ludovika-UPS, and Anna Smith Lacey, Executive Director of HIF.

Ludovika is a specialized higher educational institution, the principal aim of which is to educate highly qualified personnel for the civil service, the military as well as the different branches of law enforcement. Besides the faculties, the Ludovika research institutions focus on topical international questions as well as the theory of the state. In the autumn, new programs like the College of Visegrád and the Hungarian Diplomatic Academy will be launched. The beautifully restored old Royal Ludovika Academy symbolizes the important heritage of the university, while the newly built educational facilities are equipped with state of the art technology to help the educational activities.

HIF has already nurtured a great relationship with NKE, the institution is a special partner of the Budapest Fellowship Program. The newly signed MoU aims to expand coopeation on exchange of students, professors, and researchers between the two institutions, as well as the exchange of professional experience and the implementation of joint fellowship programs. At the signing ceremony of the Memorandum, Rector András Koltay said

“We are preparing for meaningful, long-term cooperation.” – András Koltay, Rector of Ludovika-UPS 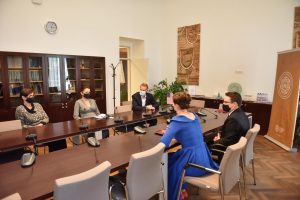 HIF Executive Director, Anna Smith Lacey pointed out that Ludovika hosted the Budapest Fellowship Program’s participants during their opening orientation week for a full day of briefings. The university’s campus hosts Stephen Sholl, Junior Budapest Fellow and Ryan Brockhaus, Senior Fellow of the Program is conducting research at the American Studies Research Institute. With this newly signed agreement, the two sides will explore new avenues of cooperation including with the American Studies Research Institute.

“We’ve been working for a while now on strengthening the US-Hungarian relationship in academic circles, there is definitely an interest in Hungary on the other side of the Atlantic, we need to build on this.”  – Anna Smith Lacey

Boglárka Koller, the Vice-Rector for International Affairs of Ludovika-UPS also attended the signing ceremony of the agreement, while under the provisions of the Memorandum, Klára Breuer, International Director of the University, shall be responsible for the implementation of the academic cooperation indicated by the agreement.

For the occasion of the signing of the Memorandum, Anna Smith Lacey, HIF Executive Director was interviewed by NKE’s Ludovika TV.