Monthly selection of promising events from all around the US.

In this new column, we will collect the most promising events for you from all around the country in the beginning of every month. We also recommend you to check our event calendar on our home page for quick information and maps. Here, we would like give you more detailed event descriptions, and we hope that our recommendations will inspire you to visit some of the programs and events. 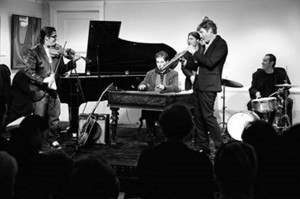 If you like jazz and roma world music, we highly recommend you to attend the concert of the East Gipsy Band on January 14 at the Consulate General of Hungary in New York. The band represents an exciting fusion format for creating unique and captivating music. Accordingly, theirs is an adventure with the traditions of Roma music filtered through the sensibilities of jazz. The band, formed by József Balázs, consists of the founder on piano, Lajos Sárközi on violin, György Orbán on double-bass, Vilmos Oláh on cymbalum, and Elemér Balázs on drums, with Guszti Balogh contributing vocals. Their debut album Ageless Message was released in May 2011, featuring the great saxophone player Tim Ries, who invited the band to tour with him the East Coast of the United States and Canada.

An interesting event for literature lovers organized by the Hungarian Club of Washington, DC: a book launch will be held on January 18 at 4 pm at the home Géza and Margit Serényi about Marianne Szegedy-Maszák’s book entitled, “I Kiss Your Hands Many Times”. Arianna Huffington, president and editor-in-chief, the Huffington Post Media Group writes on the book – “I Kiss Your Hand Many Times is the sweeping story of Marianne Szegedy-Maszák’s family in pre– and post–World War II Europe, capturing the many ways the struggles of that period shaped her family for years to come. But most of all it is a beautiful love story, charting her parents’ devotion in one of history’s darkest hours.” (Contact: Kinga Révész, kingarevesz@gmail.com).

Another musical event for those who prefer the more classical genres will be a concert for the celebration of the 70th Birthday of Karl Jenkins at the Carnegie Hall in New York on January 20. Distinguished Concerts International NY honors the 70th birthday of UK composer Karl Jenkins with an evening comprised entirely of compositions by the honoree. Homages include the US premiere of Jenkins’s The Bards of Wales, the piece Stabat Mater, and Benedictus from the full-length work The Armed Man: A Mass for Peace.

For those who live in the sunny Sarasota, Florida, it can be a great program to listen Ottilia Varga’s presentation on the Hungarian Heritage Program at the Smithsonian Folklife Festival; the Hungarian Americans Together (HATOG) conference; and the meeting of the Diaspora Council in Budapest. The presentation will be held at the Selby Library on January 30 at 4:30 pm. The event is organized by the Kossuth Club in Sarasota, FL.

The exhibition Forgotten Neighbors in Los Angeles is still open for visitors. Forgotten Neighbors displays the richness of small town Jewish life through complete family stories. We gain a unique glimpse into the past as we learn how Count Esterházy supported the construction of the town’s synagogue, and who the most beautiful girl was in the 1930s – and who was in love with her.

In 2010 András Gyekiczki, a lawyer, was eager to find out more about the people who had lived in Pápa, Hungary before the war. He began to collect photographs of the survivors’ descendants and documents related to the town’s past. His team ultimately collected more than 500 photographs from the pre-war period, which include family photos, portraits taken outdoors or in studios, and images of the town’s social events. For more information go to:http://www.lamoth.org/exhibitions/temporary-exhibits/

← Prev: The return of the Holy Crown Next: Important information about applications →